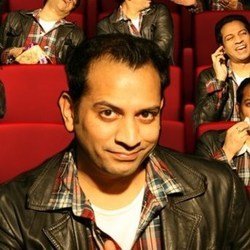 The UK's funniest globetrotting impressionist returns with the laughs, wrestling with his life and love of movies in this fast paced, action-packed, feel good show. Join Anil as he twists, turns and transforms himself into over 50 movie stars! Featuring live movie trailers, stand-up, stories and an all star cast of impressions! 'Highly entertaining ... an accomplished act ... must be seen to be believed' (Herald Sun, MICF 2012). 'A tour-de-force of impressions .. .side-splittingly funny ... his ability to change his face, voice and physicality is undeniably astounding' **** (EdinburghGuide.com).