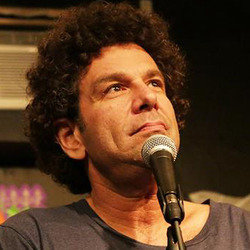 Enter a mentality with an absence of normal functionality but he is so self-aware yet stubbornly refusing to acknowledge reality. Al often thinks to himself he should stop being such a spoiled brat but the problem is his very next thought is ... No! Often stand-up is considered therapy for comedians and Al is committed! 'Lubel goes for the comedy jugular, tackling his self-created worst case scenarios with logic that makes eerie sense' (Comedy Corner L.A Drama-Logue).'Al Lubel is a terrifically funny comedian' (David Letterman).

The hilarious American comedian Al Lubel is making his Edinburgh Festival Fringe debut with his new show Al Lubel is Mentally Al at the Just The Tonic Caves from the 1st - 25th August.

Often stand-up is considered therapy for comedians and Al is committed! Al's mentality has an absence of normal functionality but he's so self-aware, he stubbornly refuses to acknowledge reality. Al often thinks to himself he should stop being such a spoilt brat but the problem is his very next thought is.......NO!

Al Lubel became a lawyer to please his mother and a comedian to please himself (which did not please his mother which, wouldn't you know it, did end up pleasing Al). After graduating from law school in Florida, Al moved to Los Angeles, passed the California Bar Exam on his first try and of course, immediately began the practice of stand-up comedy.

Lawyer by day and comedian by night, Al was doing justice to neither. So, Al quit the law. This was a good decision, because within a year he won the $100,000 Grand Prize for comedy on Star Search. Doing the The Tonight Show was a childhood fantasy, so when Al heard that Johnny Carson was retiring; he auditioned and became one of the last comics to appear with Johnny. More recently, Al made his fifth appearance on the Late Show with David Letterman.