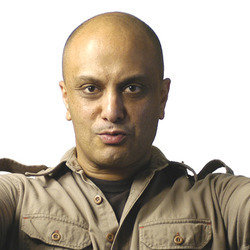 Movies, sketch, stand-up, TV appearances, radio DJ and talk-show host, improviser and published author, Akmal is one of Australia's most respected, successful and accomplished comics. He displays an incredible ability to deal with hot topics in a hilarious and slightly offensive way. 'People were rocking back and forth, holding their stomachs and shouting out with laughter' (Adelaide Advertiser). '[Akmal] is an explosion of laughter and entertainment' (Telegraph Mirror).