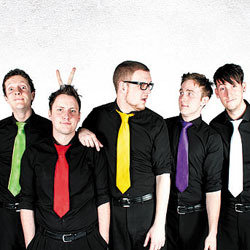 The UK's premier improv comedy troupe is back with their mind-blowing new show. Razor-sharp, lightning-fast and funnier than ever before, this year the guys in ties are cranking up the laughs in their most inventive show yet. Let's get loud... Sell-out show 2008-2011! 'Hilarious... A superior kind of chaos' **** (Telegraph). 'Performances such as these are simply beyond the capability of mortals' ***** (ThreeWeeks). 'The sheer volume of the laughter that this show produced was astonishing' **** (Edinburgh Evening News).

The UK's premier improv comedy troupe is back at the Edinburgh Festival Fringe this year with their mind-blowing new show. Razor-sharp, lightning-fast and funnier than ever before, this year the guys in ties are cranking up the laughs in their most inventive show yet.

For their game-changing fifth run at the Fringe, The Noise Next Door are mixing their distinctive brand of improvised scenes and songs with some exciting new ideas.

Every show of this year's festival will feature the live creation of a brand new episode of The Adventures of Archie Fox. The special effects packed episodes will be uploaded to YouTube every night and will be fuelled by suggestions and cameos from that day's audience. As the Fringe rolls on, so too will the rip-roaring tales of the world's greatest adventurer... Where will he end up? What will he learn? Tuning into the first ever daily improvised comedy serial is the only way to find out.

On top of this technological treat the guys have also created some incredibly complex new improv formats and are currently in the midst of learning the art of hip-hop street dance...this show is set to be very different indeed.

Over the years they have drawn a loyal fan-base and regularly headline to sell-out audiences at many of the top clubs on the UK Comedy Circuit. They have also supported some of the biggest names in contemporary comedy including Harry Hill, Al Murray and Alistair McGowan and are the first international group to have performed at FRACAS improvisation festival in Los Angeles.