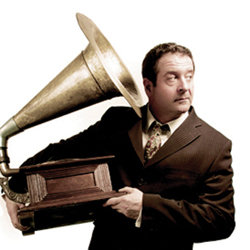 How to put on an opera in a bungalow in Bournemouth. Mark Thomas tells us about his dad - a full-on rough, but hard-grafting working-class Methodist, Thatcherite builder from south London - and the difficult relationship he has with him. This has been a fertile ground for comics of late, most notably Russell Kane, but it's never been covered as expertly as this. This powerful story was packed full of emotion, taking the audience on an incredible ride through the contradictory, complex feelings he had for this brusque character. 'Absolutely superlative stuff' (Chortle.co.uk).

After walking the wall in the West Bank, becoming Guinness World Record holder for political protests, and chasing arms dealers around the country, one of Britain's most acclaimed comics and influential activists, Mark Thomas, turns his attention to matters closer to home with a show about his father.

First commissioned by London's prestigious Royal Opera House, Bravo Figaro! is the true tale of Mark's father, a self-employed builder with a passion for opera, his degenerative illness, progressive supranuclear palsy, and Mark's attempt to put an opera on in a bungalow in Bournemouth. It is about love, death, fathers and sons, and the search for peace in an imperfect world, with a few gags thrown in for luck.

Mark's biography is simply too long to list in detail on one little press release, so let's sum up... six series on Channel 4, numerous awards, several television documentaries, three books, a Guinness World Record, sell-out tours, a published manifesto, a series on Radio 4, writing for various publications, producing charity benefits, a Medal of Honour, secretly filming torturers, stinging arms dealers, battling multinational corporations, exposing abuses of civil liberties and corporate skulduggery, and succeeding in changing some laws. These are just a few of the things that have kept him mildly busy over the last few years.