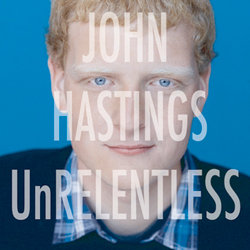 John Hastings: UnRelentless is an hour of anecdotes, ironic quips and jokes from award-winning comedian John Hastings. Laughter will be found in unexpected moments such as arguing with a drug dealer or the upside of China's inevitable domination of the world. John Hastings has been called 'hilarious' by the Montreal Gazette (during the Just For Laughs International Comedy Festival), 'particularly awesome' by the San Francisco Examiner and 'a comic to watch' by the Canadian Comedy Network. You can call him what you want. Just come see the show, please!