Kieran and Joe know seminars almost as well as they know comedy. Michael Park caught up with them last week to talk about their new show, Friends of Steel and also to get their inside-track on the world's foremost festival. 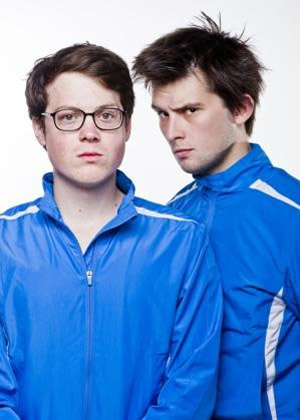 Do you take greater pleasure in being part of the Fringe as a double act rather than being up here alone?

J: We live with another sketch group called Sheeps and it's a lot of fun. You keep yourself buoyed up, you feel like you're here with a purpose.

K: If you're having a bad day then the others will say, "Oh come on, let's go and see something or let's go for a drink."

J: You're not really allowed to be down because you've got your mates around you telling you that everything's fine.

Do you find that being with other groups helps if you've had a bit of a bad day or if someone's not gone for something?

J: Y'know they have a different set of mates who you get to meet and you've obviously got your mates who they meet and then you've got different people who come and stay and you go to shows that they recommend as well.

K: We're going to play football with a couple of sketch groups tomorrow.

K: It makes it a lot more social. If you're on your own and you have a couple of bad shows then I can imagine throwing myself in front of a bus.

J: Luckily I'm there to stop him throwing himself in front of any buses. Either that or we'd both get really depressed and throw ourselves in front of a bus. We've got close to that in the past.

K: Yeah, I find when Joe's down on things then that makes it easier to forget my problems and vice versa. We're supportive of one another.

J: That doesn't come naturally to me, my natural disposition is pessimism and, "Oh my god, that was the worst show ever."

Well, provided things are going well which I assume they are - what's a regular day at the Fringe for you?

J: Well the first thing I do is finish the episode of Game Of Thrones that I've fallen asleep to the night before. Then it's breakfast. Kieran, what's your usual breakfast?

K: And we're flyering for ourselves so we're over to the Royal Mile about ten o'clock then I go off and do my solo show at the Voodoo Rooms and I meet Joe and we run our lines for the whole show. That's Joe's preferred warm-up technique. 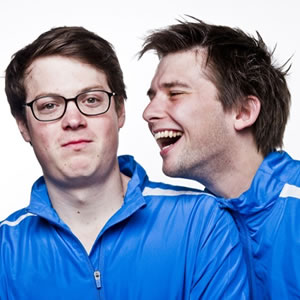 For the whole hour?

J: Yep, whole thing. A speed run and Kieran hates it but it's a sign of what a good lad he is that he goes through it every day. I'm too nervous about going out there without having run the lines recently. I'm a bit neurotic that way.

I suppose it's different for you being just the two of you as when you're part of a five or six strong group you can pop off and have a quick peek at your lines.

J: Exactly, yeah. The nature of our show is that neither of us are really off stage at any point... at all... for the whole hour. There's none of this lights down, lights up stuff. The lights are on us all the time and there's nowhere to hide. Doing it that way is quite a nice way of avoiding the "applaud here" moment.

K: There's nothing worse than the lights going down and going, "Here you go. Applaud now." and no-one does. But after the show we do a bit of flyering for people leaving and then we'll do a bit more before we see what's happening that night. Bumping into people you know, having a few drinks and seeing shows makes the whole thing seem a bit more organic.

Are there any shows you'd recommend?

K: Who are bonkers.

J: Bonkers and brilliant. The Pin, everyone's very excited about, it's their first year. Sheeps as well, they're in their second year and they're great.

How many years have you done yourselves?

K: This is my sixth year in one form or another and I've seen a lot in that time. All the venues and stuff but every year we've been in a different place which is great. Being at the Pleasance this year is really nice too, it's a bit different.

As we said earlier, you do your PR yourselves. Do you find it's easier to explain and sell your show yourself rather than having someone else do it?

J: It's a double-edged sword really. You've got to get up every morning and get out and flyer your own show but on the other hand it's nice being in control of selling your show. As we've seen a couple of times since we've been sitting here, other people flyering your show don't really know or care about it, they just stick a flyer down. We get to tell people about the show, explain it and try to put across our feelings about the show.

K: I'm really bad at flyering so our producer Tom does my share. 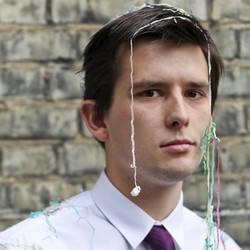 You're doing a solo show at the Free Fringe, Kieran. How does that compare?

K: The Free Fringe is fantastic because on some days you can have a full house and not to say the expectations are lower but people are taking more of a risk in coming to see you and they want to see it pay off.

J: In some ways it's less of a risk too. They haven't paid any money and they're sitting there hoping it's funny as opposed to having paid £10 and expecting it to be funny. When you're taking people's money, you're under a lot more pressure.

Would you say that there's more of a risk as an audience member going to a stand-up show than there is in going to a sketch show?

K: The received wisdom for a sketch show is that it's going to be hit-miss-hit-miss so there will probably be a few sketches that you enjoy and you get to refresh the palette every few minutes whereas if you're in a room with a stand-up for an hour there's a lot less chance that they'll win the audience back round.

J: Sketch is a little bit easier not to have a terrible gig.

K: It's harder to have a sense of identity though. With a stand-up you can go and see them and they have a voice, they're saying something fresh and interesting. It's a bit harder when there's a bunch of guys in their twenties all standing around doing gags about walking into a vet.

Do you ever feel marginalised that so many people are coming to the Fringe purely to see stand-up shows?

K: Well it's always dangerous to make too much of generalised trends but over the last five years or so stand-up has been the big winner. When I was a kid there was barely anyone standing up on TV. In the 90s, it was the sketch shows. Big Train, The Fast Show. Sketch shows have receded and it's hard to see what our place is. When you're a comedian, you do well at Edinburgh, you get a few TV spots and that's you. It's a proven route to a big sell-out tour.

J: There are some people who get their own sketch show but they're such a rarity. There's a few sketch showcases but it remains to be seen whether they're widely popular.

Would you say that having more sketch shows on TV would be a benefit to sketch comedy?

J: A really great sketch show would be great but is there an appetite for it? I think the best examples of sketch shows that have gone on to be really great TV shows are the ones who put their sketch ideas into a narrative structure. Creating a world and making something of a sitcom out of it.

K: There are big, successful sketch shows but they're usually two well-known performers working in a double act and then a lot of different people write their sketches for them. Those are the most popular ones but it's not the same as a little group with their own skewed view of the world. 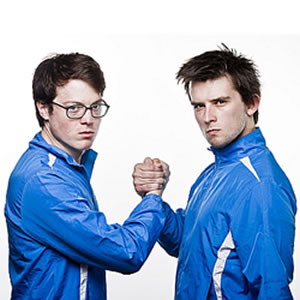 Unlike a lot of sketch shows, you stay in your characters for the duration of the show so I have to ask, how much of your personalities go into the characters you create?

K: There's an optimism and a desire to be liked which is there too.

K: There's a difference though in that you're a bit more self-aware and you're able to take a step back and laugh at life. Joe's character is unable to do that.

J: Kieran's character is much further away from who he is in real life but that's because Kieran's a good actor. There's a bit of detachment from reality this year as well. Last year we were sort of lifestyle gurus who are obviously a thing but this year we're friendship coaches which...

K: ...If they do exist, I'd really like to meet one. We've changed it a bit by having backstories now.

J: Our characters have a lot more depth and you learn a lot about them in the course of the hour.

You encourage a lot of audience participation in your show, do you enjoy getting people involved than you would just playing to an audience?

J: I tend to do more of it, which is why Kieran might be cagey about it. It's a really important part of the show, being outward looking. We don't invite people into the show to sit for an hour and be amused. Part of the idea with a faux-seminar is that we ask people to engage with it and on some level go on some kind of journey with it. I don't think we've ever had a case of someone refusing to get on board with it and we've done some pretty mad things. I mean, last year we got audience members to waterboard each other.

K: No-one ever refused to do it. Our philosophy is that our interaction isn't really interaction. We get members of the audience to fulfill roles but we never do the old, "Where are you from, Madam? Oh, that's a stupid place." We involve people but they have a very clearly defined role and it's all very controlled. It solves a lot of problems with only having two people as well. If you need someone else, like in our date, then you can get someone from the audience.

J: They're part of the punchline and the joke. We're not just sitting them there for the sake of it or to be mocked.

You can see 'Kieran & Joe: Friends Of Steel' at The Pleasance Baby Grand (Pleasance Courtyard) until the 27th August. Listing