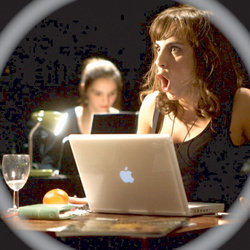 Meet Annabel, a 27-year-old obsessed with her colleague, Sebastian. Annabel is convinced that the only way for her to be united with her colleague, is to approach Sebastian online. Empowered with Facebook, LinkedIn, and Twitter, will Annabel ever get her man? Composed, written and directed by Anne Chmelewsky (The Office: The Opera, BBC Comic Relief 2009). Starring Clare Presland. 'Mesmerising, has an intensity that almost sears the flesh' (Times). Accompanied by Elizabeth Challenger on piano.

Meet Annabel Clark, a twenty-seven year old Londoner obsessed with her colleague, Sebastian Smith. Disillusioned by dating mishaps and social awkwardness, Annabel is convinced that the only way for her to be united with the object of her desire is to approach Sebastian online. Empowered and armed with Facebook, LinkedIn, and Twitter, will Annabel ever get her man?

Through The Looking Screen is a salutary tale for anyone who ever believed that the road to true love begins with an evening in, an open bottle of wine, a profile page and an innocent online quarry. Annabel Clark is living proof that in a land where communication is king, misunderstanding lurks behind every corner and that the simplest of acts like say, the mere click of a mouse, can set the timer to misery.

Opera meets comedy in this story of our times - a story of the search for true love, of low tactics and of high heels and high Cs. Through The Looking Screen is produced by Anne Chmelewsky and Charlie Hanson (Extras, Cemetery Junction).

When, in 2009, her opera based on The Office was spotted by Ricky Gervais and Stephen Merchant and featured in their BBC1 fundraising sketch for Comic Relief Anne Chmelewsky won national recognition. She is a French composer, specialising in TV and film music. After completing a degree in Composition at the Guildhall School of Music and Drama, Anne went on to do a Masters in Composition for Screen at the Royal College of Music.

As well as developing a career on the classical concert platform and on the operatic stage, Amy J Payne is a founder member of The Bombshellettes, the UK's only 15-piece all-female swing orchestra. In 2009, she was the performer of the winning song in the Best New Musical Theatre Song category. Musical theatre roles include: Fosca Passion (Primavera Productions) and Mrs. Lovett Sweeney Todd (Millrace Productions). She has also performed in pantomime (creating the role of Wiglaf in Beowulf) for Charles Court Opera and cabaret for Trilby Productions and Ergo Theatre.

Elizabeth Challenger was born in Paris in 1982 to a French mother and a Scottish father. Elizabeth studied at the Guildhall School of Music and Drama, obtaining her BMus degree in 2005. Elizabeth has performed recitals as a soloist, as an accompanist, and as part of chamber music groups all over the UK and Europe. Elizabeth is currently finishing an MA in piano accompaniment at the Royal Academy of Music in London. She was highly commended in the Huxley Prize (2011) and Webb Awards (2012) for accompanists.