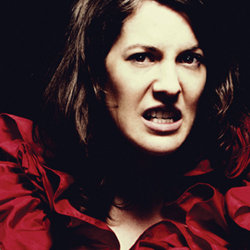 Back after last year's critically acclaimed hit show. This time the volume's been turned up even higher. Acutely well-observed and high octane, this is the ultimate in red-blooded character comedy. Including 80 rare-breed dogs, a cavalcade of dancing monkeys and one hellcat (line-up subject to change.) 'Hilariously executed with commitment, verve and a cracking script - endlessly entertaining' **** (Chortle.co.uk). 'Knox inhabits her characters like squatters in an Islington townhouse' **** (FestMag.co.uk). 'Near ridiculously pitch perfect. The room erupted with everything she said' **** (TheNewCurrent.com). 'Deliciously entertaining' **** (BroadwayBaby.com). www.catrionaknox.com.

After last year's critically acclaimed Edinburgh debut, Catriona Knox (one third of hugely popular sketch group The Boom Jennies) returns with a frenetic new show, Hellcat, featuring a menagerie of endlessly creative characters. Expect a jam-packed hour of Catriona's brilliantly twisted comic creations. Acutely well-observed and high octane, this is the ultimate in red-blooded character comedy. Including: eighty rare-breed dogs, a cavalcade of dancing monkeys and one hellcat (although line-up is subject to change).

With her fast-paced, boisterous and surprising brand of sketch comedy, Catriona has won herself many fans who delight in her odd-ball character creations. Clever, kooky and inspired, her performances are memorable for their softly barbed execution as well as the strength of her material.

Since 2011's debut, Catriona has appeared in the brand new series of Not Going Out (BBC1) and in the debut sketch show, Strap In, it's Clever Peter! broadcast on BBC Radio 4 in May - she played the female roles in all four episodes.

She has also recently performed as part of a brand new live sketch show, Sketchorama! for BBC Radio 4 as part of the Boom Jennies, which will be broadcast in the summer and they are currently writing a four part narrative comedy series for BBC Radio 4.