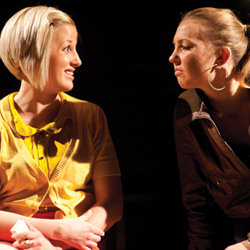 A dark comedy following two work colleagues during their fag breaks. They bond through witty conversations discussing their personal lives and mundane work life. 'Owen proves a master at creating something which seems ordinary and yet has something strange and dark stalking it at the edges' (Guardian). 'With a de-centred and a-linear linguistic structure, the actors' bodies are the centre. The acting is impressive. As Alex Bull and Emily Rees leave the small space of Aberystwyth's studio, a stillness after the applause is palpable. You can smell an audience that is satisfied. Deeply touched' (Adam Somerset).