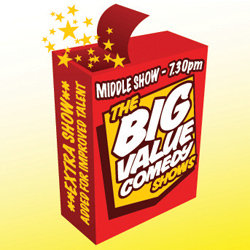 Four acts for the price of one. The hottest acts on the first step to success. We audition all year for these shows. We have so much great new talent that we've created an extra show. In previous years Big Value has brought you these people before they were famous: Sarah Millican, Jason Manford, Seann Walsh, Charlie Baker, Pat Monahan, Jim Jeffries, Josie Long, Milton Jones, Adam Bloom, Jon Richardson, Glenn Wool, Mickey Flanaghan, Steve Hughes, Matt Kirshen, Justin Moorhouse, the list goes on.