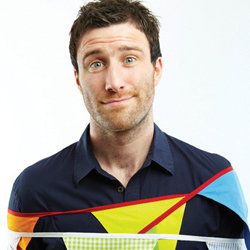 Following last year's critically acclaimed sell out run Andrew Bird returns to lift the gloom of the modern world with the delightful madness of the village. Expect new stories of village life, growing up, moving away and then what happens when you come back. From the sleepy villages of England to the plains of Latvia - this time it's global. Total sell out 2011. There will be a raffle. 'Comedy gold' Scotsman 'A natural comedian' The Stage. 'Superb' Time Out. www.andrewbirdcomedian.com

Andrew revels in the eccentricities of village life, not only in the UK, but also around the world. Drawing on both his upbringing in the countryside and his wife's childhood in rural Slovakia.

This show is a celebration to remind people that perhaps these wonderful, unique, slightly mad places need saving - and may even teach us a lesson or two.

That is not to say that some things in the countryside are not to be questioned, and Andrew is the man to do it. We're not talking about agricultural reform, or hunting, but the red tape and bureaucracy that come with trying to put on a comedy show in village halls up and down the land.

After attempting to create a UK village tour about rural life, he is left wondering if life 'in the country' is dying out. With so many village pubs and post offices closing every week where will kids be able to drink underage, set fire to things and learn to shoplift?

What will happen to that idyllic country life? Is it really the ideal place to live? 7 million Countryfile viewers every week can't be wrong... can they?

Since last Festival Andrew has looked at many more villages, from the weird to the wonderful; the most northern, southern, eastern, western, highest, longest, oldest, most haunted and that one with the longest name Llanfairpwllgwyngyllgogerychwyrndrobwllllantysiliogogogoch. (What's it an anagram of - everything!) Andrew has insights into villages with strange traditions from horndancing to cheese rolling.

But does country life prepare you for this hectic modern world?