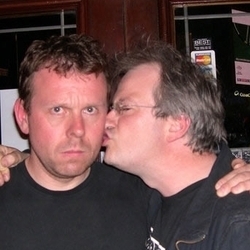 Robin Ince and Michael Legge, who like everyone on the Fringe are award-winning' and appeared on Mock the Week (not Michael), get angry about stuff again. Last year was a total sell-out despite their best efforts to discourage people from turning up. Come see two men who you'd normally see shouting in a park and crying. If you like laughing at men with blotchy skin (Michael this time) and who, if they were a dog, would be shot by a kindly owner, this is for you.