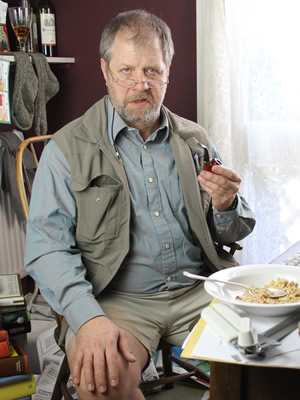 While the Pleasance Courtyard is awash with spunky young comics looking toward glittering careers on stage and screen, further back you'll find Ed Reardon, resplendent in make-no-effort loungewear and pondering a glittering past that might have been.

Not that Radio 4 freaks are bothered by the height of your haircut or the tightness of your trouser, and Ed has become quite a station stalwart in recent years. Christopher Douglas's creation is a sort of thinking-man's Al Murray, getting apoplectic about the dubious merits of modern novel-writing and the state of the nation's punctuation, for an audience who probably do exactly the same in a more reserved manner. Hey, he's just saying what we're all thinking.

This stage offshoot of Ed Reardon's Week is an autobiographical dawdle through the ups and downs of a lengthy literary career, from his dynamic years in the Martin Amis party set to financial ruin and a career resurgence due to the good people at Ladybird and numerous dubious celebrity tomes.

Reardon's one-man show is actually a three-hander, as he's joined onstage by a couple of thrusting young(ish) physical theatre types, a coming-together clearly destined to end in tears. Along the way there are some splendid literary barbs, a Jim Rosenthal joke (the veteran sports presenter features in so many shows this year, he may well be up for Best Newcomer), a bit of dancing, a tiny splash of sex and even a few gentle digs at The Pleasance.

Can the young bucks compete with that? Can they buggery.