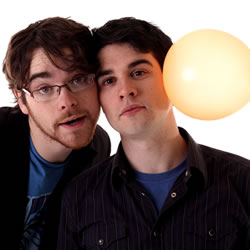 Jollyboat are back with a rockstarninja show of award-winning comedy songs. From their full-house debut at the Fringe last year, brothers Tom and Ed have gone on to win the national Musical Comedy Awards, three separate best-of-the-year competitions at Liverpool's comedy clubs, and a host of gong shows and talent competitions. With over a year of experience behind them now, Jollyboat are rocketing up in the comedy world very fast indeed.

As brothers, Tom and Ed not only get on, but share an extraordinary rapport. They live together, work together, write together, and have the same imaginary friend. Because of this, their velociraptor-paced material is delivered with a unique blend of note-perfect tightness and relaxed fun. They've been practicing literally their whole lives.

The show is a mix of last year's hits (including the Pirate Pop Songs, the Jesus Rap, and a 21st century Cole Porter song), and new material such as the Keyboard Shortcut Love Song, which was one of the winning pieces at the Musical Comedy Awards. Every one of their pieces is funny and catchy in a different way.

In two years when you see Jollyboat on TV, you can say "I was there!"