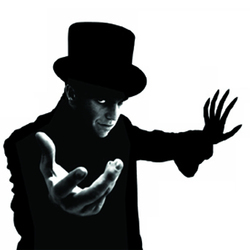 It's time to go mad. Words are played with. Violence is dished. The world's greatest kid's entertainer hates kids. All your favourite children's stories get chewed up by a ferocious monster. Gin, anyone? 'Intelligent and articulate comedy, capable of greatness' (Skinny), 'One of Australia's top 10 young Aussie comics' (Zoo), **** (ThreeWeeks), **** (Youthreview.co.uk), 'Robertson is a manic and sharp-witted revelation' (Scotsman), 'Such a commanding presence that the audience is swept along on the force of his personality alone' (Chortle.co.uk). Winner Critic's Choice Award (Wild West Comedy Festival).

John Robertson has become a cult figure on the Australian comedy circuit; known for his collections of darkly humorous obscure stories, weaving fairytales and folklore into new gory and cautionary tales.

In 2010 he took a 40 minute show, A Nifty History of Evil to the Edinburgh Free Fringe and promptly won the Dark Chat award for Best Comedy performance plus a bunch of critical acclaim.

Blood & Charm is a combination of comedy, cabaret and pathos as all your favourite children's stories get chewed up by a ferocious monster. It includes future classics such as The Little Match Girl Discovers Life and Death In Soviet Russia, The Man Whose Thoughts Are Too Loud For His Head Has Thoughts That Burrow Out Of His Skull, and... The Pretty Boy is Cannibalized By Hipster Zombies.

Not suitable for children, unless you know, you just don't like your kids.