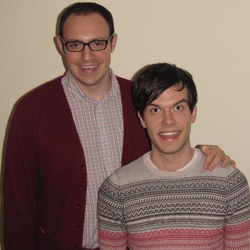 Father and son double-act Barry and Clive Ester know why you're unhappy. They understand your financial worries, your romantic embarrassments, your frustrations with the Welcome Break service station on the M6. They understand this unhappiness because they've been there too - the pasties were terrible and the price of petrol was astronomical. Thankfully, Ester & Son are travelling the country to reveal the secrets of happiness. You'll learn how to turn that frown upside down, make that pout inside out and take that grimace and ... stop ... grimacing. 'I thought I was going to die laughing' (ThreeWeeks).

Ester & Son are a double-act created by Lawrence Gemmell & Adam Reeve. Lawrence had a YouTube hit in 2010 with Arts Graduate Unemployment Song (YouTube) and Adam is a founder member of The Unexpected Items and has written for BBC Radio. Both were members of The Oxford Revue.