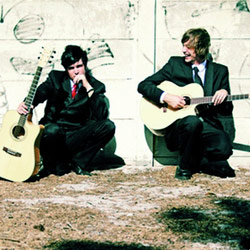 Do you enjoy songs about evil pirate captains, the global economy crisis, movie spoilers and scrunchy-faced celebrities? Join Dylan and Simon for an evening of comedy and music. From their humble beginnings in South Africa four years ago, the Brothers Streep managed to stumble into the spotlight last year when they appeared on the 'Graham Norton Show' playing to Anna Paquin. This year the comedic duo thought it was time to share some more of their songs with the world. Or at the very least, with Edinburgh.