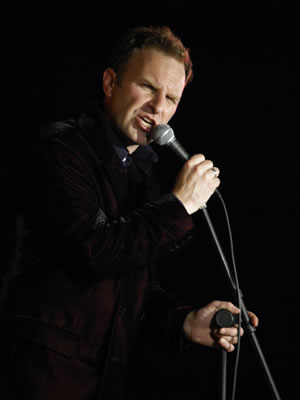 It is perhaps ironic to call a show Fringe Magnet when it appears not to be attracting punters as strongly as it should, but Simon Evans is too much of a gentleman to point this out. Or so he appears at the top of the show anyway, as he politely thanks us all for coming and points out that he could probably dispense with the microphone, but he likes the protection that the stand offers him. Following on from this acknowledgement, Evans puts everyone at their ease by bringing up the subject of his eyes, or lack thereof, and then proceeds to deliver a first-class (his received pronunciation and Mountbattenesque diction require the use of descriptions like "first-class") hour of material concerning the hardy peoples and wildlife of the British north, the many useless objects and rituals associated with hotel rooms, and other familiar areas where Evans can see opportunities for betterment and improvement, all of which are deftly expressed.

What lifts Evans's show above being a series of extremely funny observations and makes it a bit special is Evans's own subversive nature. Make no mistake, this well-brought-up, seemingly old-fashioned man with his wistful recollections of his grandfather's stash of girly mags and his eccentric asides about ordering strong magnets from the Internet is a man on a mission. Although Evans claims that the show doesn't have a strong message, he actually has a genuine, clear, and straightforward idea of how to make the world a little bit better, and he offers it up towards the end as one man's act of defiance against the modern world. And of course, coming from Simon Evans, it seems highly reasonable and, well, attractive.