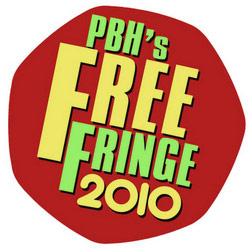 Quiz-panel-comedy-show presenting a different line-up every day. Marvel at comedians attempting ridiculous challenges using song, improv and stand-up. This seemed like a good idea in March ... and by now it'll be ready, hilarious and inevitable! Lock up your fathers! Nicola Bolsover's back with her quirky, offbeat and polite comedy. 'A delight' (Stage); 'entertaining' (Chortle.co.uk). Laura Lexx is a uniquely gleeful performer with an easy, chatty style, described as a 'next-generation Lucy Porter' (Chortle.co.uk). www.lauralexx.co.uk Dan Carter-Hope is a force of nature. So is wind. He does sketches, characters, comedy songs and moments of awkwardness.