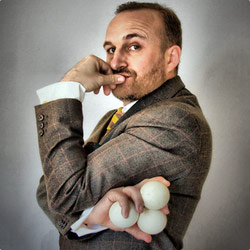 Mat Ricardo has spent the last twenty years schlepping around the world performing amazing tricks that he's now bored with. Now he's back in Edinburgh and he has some things to get off his chest. Astonishing, hilarious, jaded, and the only person on the planet able to put the tablecloth back on the table! A rare festival appearance by this veteran international cabaret performer. 'Impeccable charm and considerable skill' (Bruce Dessau, Evening Standard). 'The highlight of the evening ... it became hard to breathe due to the constant laughter ... simply magnificent!' (Parkscout).