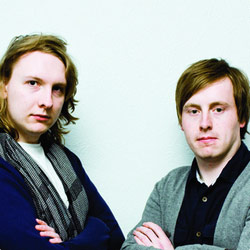 Reigning Chortle Best Newcomer Joe Lycett and Hackney Empire New Act of the Year finalist Andrew Ryan bring their double-header of a show to the 2010 Edinburgh Fringe - for free!

Joe Lycett and Andrew Ryan: An Hour of Humour at The White Horse (venue #296) as part of PBH's Free Fringe will take topics such as needless abbreviations, look-alikes and menial employment to task, with each comic putting their audience through 30 minutes of an excruciatingly funny set.

The show brings together two of the most exciting young talents on the circuit, with Joe possessing the 'complete package of innate comic charm and warm wit' (Chortle) and Andrew the accolade of being 'funnier than Ardal O'Hanlon' (CityLife).

Joe's career in comedy began in 2008 and he has since enjoyed a meteoric rise, securing the Bath New Act of the Year 2009 title as well as runner-up places in the Laughing Horse and Latitude Festival's New Act competitions of the same year.

The 21-year old won the Chortle Student Comedian of the Year title at the 2009 Edinburgh Fringe during a 71-gig run and made his television debut in BBC3's comedy pilot Laughter Shock in March 2010. In the same month he was named Chortle Best Newcomer 2010, with previous nominees for the accolade including Jack Whitehall, Pappy's, Sarah Millican and Russell Kane.