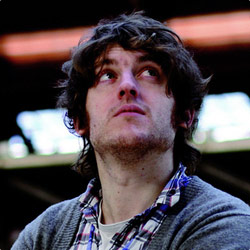 Wandering alone through Britain's market towns gives Elis James an intimate relationship with boredom. Elis, however, is a man who loves a daytrip, and has money to spend on souvenirs. Following last year's acclaimed debut show and fresh from the Melbourne Comedy Festival, Daytripper combines Elis' love of history and pop music with his obsessive personality to take audiences on a journey of self-discovery - via the American Museum in Claverton Down. 'Getting the sort of word-of-mouth recommendations that much more experienced comics would kill their mothers for.' (Scotsman); 'A complete joy' **** (Time Out).

Music bands or independent museums. Elis James' obsessions know no bounds, and in his brand new show for the Edinburgh Fringe Festival 2010, Daytripper, the rising Welsh comedian will detail his compulsive behaviour with the charming delivery that has made his one of the most sought-after acts on the circuit.

It began with obscure Welsh band Gorky's Zygotic Mynci before Elis's history degree and lifestyle - which saw him spending large amounts of time alone in small and wayward market towns with little to do - saw him become obsessed with museums, souvenir shops and the local tourist attractions the rest of us avoid.

Daytripper - part of the Five Pound Fringe - promises to cement the 29-year old's reputation as the face of new Welsh comedy, with Elis 'getting the sort of word-of-mouth recommendations that much more experienced comics would kill their mothers for' (The Scotsman) after he 'hypnotises the audience into loving him' (Time Out), quickly developing into 'one of the most promising emerging acts around' (Chortle).

Elis's offering to the Edinburgh Fringe programme last year, The Most Cautious Little Boy in Wales, received widespread critical acclaim and four star reviews, leading to him regularly supporting fellow Welshman Rhod Gilbert (they're from the same town) on the latter's UK tour. He was also part of sketch group Superclump which received four star reviews all round and featured If.com best newcomer nominee Mike Wozniak.

In the aftermath of last years Fringe, Elis was selected to tour Australia's comedy festivals with Best of the Edinburgh Fest, the show which has featured Dylan Moran, Ross Noble, Simon Pegg and Ardal O'Hanlon in the past. A versatile comic actor whose character creation 'Rex' is a regular feature on Gilbert's BBC Radio Wales show, Elis' profile has been further boosted by guest presenter appearances on BBC Radio One Wales and, on the live circuit, with his participation in prestigious comedy showcase The Comedy Zone and South By South Wales at the 2008 Edinburgh Fringe.

Be it youthful affections or strange neuro-reactions, the obsessions in Elis James' Daytripper promise to further propel the comic towards the big-time, so make your way to The Tron to witness first-hand the laid-back, whimsical style that has made him so popular.