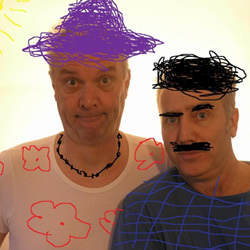 Roy and Tony play eight characters, stitch themselves up in the process and conjure up the Sussex coastline - before destroying it in an avalanche of comedy. Top-class knockabout comic romp from comedians with two Fringe Firsts, three Perrier nominations, an Olivier nomination and a performer of the year award from Time Out: 'Character comedy - with a twist. Check them out.' 'Laugh out loud funny... crammed with hilarious observations... finely honed... unique and brilliantly demented... poignant as well as utterly mad' (Latest); '...another Morecambe and Wise-esque journey into the surreal and brilliantly bonkers...' (Sussex Express).