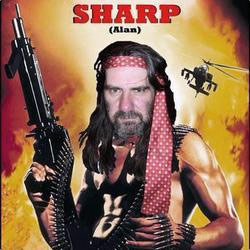 The world is going to hell in a hand basket. Global warming, the economy in meltdown, pandemics, the war on terror; something needs to be done. Comedian and author Alan Sharp understands the problem: the problem is people. They infest the world and for the most part they can't find their own arses with a flashlight and a map. He also has the solution; it involves him and a gun. If you come to the show, he promises he won't shoot you, though. Probably.