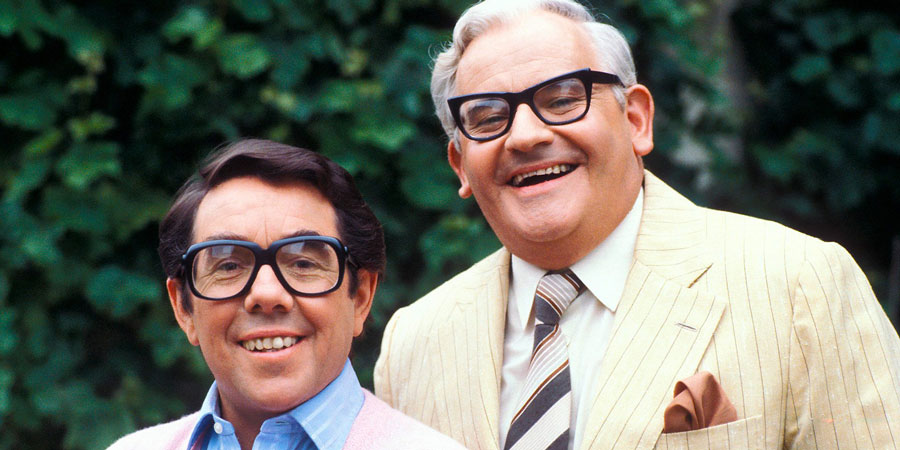 How good a writer was Ronnie Barker would you say? (AKA Gerald Wiley, Bob Ferris, Jack Goetz, David Huggert and Jonathan Cobbald) This whole thing of wondering whether Wiley was Stoppard, Muir or Bennett. I don't think he was as good as Frank Muir or Alan Bennett for one.

A good parodier, I'd say.

Inspired by this thread, I bought the complete box set on Amazon for £47 last week; not a bad price for 12 series plus the Christmas specials, especially as individual series cost around £7 each.

Link here if anyone else is similarly inspired.

Apologies if it has been mentioned elsewhere in the 8 pages of this thread, but my personal favourite would be the one where the 2 of them are using adjacent payphones, with Corbett ringing his wife and taking her shopping list and Barker phoning his son to find out how his date went, but they end up getting crossed lines to create brilliant results. The Mastermind sketch is priceless too.

So many to choose from!

Two Ronnies' Sweeny Todd musical number existed - Series 9, Ep 3 - and yes, it was a tad harsh. I'm sure it disturbed me at the time but it was probably down to the surprise and to my tender years so I'd like to see it again but it ain't on YouTube and even the repeat was reportedly edited...

Latest ever follow up but yeah, I was right. Vaguely. https://www.youtube.com/watch?v=HEmwfk4JWq4

I'm ashamed to admit this but I don't actually like the 'Fork handles' sketch. Maybe it's because it's been seen so many times that it's just lost its appeal to me but while I find it amusing I don't think it's anywhere near the best thing they've done.
Choosing a favourite Two Ronnies sketch would be like trying to choose your favourite child to me (not that I have kids mind you).

It's not a favourite but one that's stuck with me for years was an early musical sketch of sorts where the pair of them are stood round a piano singing with Corbett echoing the last part of the line Barker sang. While they were always being a bit saucy I'm amazed they got the punchline through the censors.

It's been a while since I've seen it so I can't remember the lines at all apart from the pay off but it went something along the lines of.

The Optician sketch - never fails with me, especially when RC starts to read out the furniture in the sight test.

What do you call a humourous dog with diarrhea? Runny Barker.

Does anyone remember a Two Ronnies sketch where Ronnie Barker asks a young lady to pass the nuts in a pub and she shouts go back to your place, which embarrassed Ronnie B?