Yes - I seem to remember seeing it too some years ago but not like you when it first came out.

That's right, and here's me being passed down the crowd at that match to get a better view at the front and you with the trilby hat on (see red arrow) giving a helping hand. 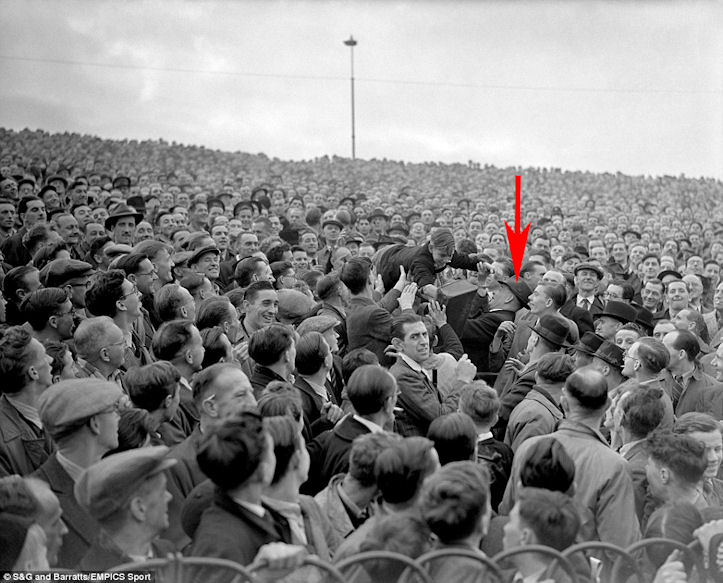 Is this from kneeling down before a game?

Perhaps its from dog whistling?

Instead of watching England's "Friendly" I'm watching Scotland in a competitive match in Serbia on Pick (Freeview). They're winning 1-0 at the moment but Scotland are always likely to snatch defeat from the jaws of victory.

I watched the second half too Chappers. (England friendlies don't do it for me)
It was a great match. Scotland winning, then hanging on, then penalties.
5 - 4 on pens and a place in the euro's
Entertaining stuff.
Now hopefully, England can give them a right stuffing in the euro's

Just as a matter of curiosity, does anyone know if Tyrone Mings was named after County Mings in Northern Ireland?

I watched the second half too Chappers. (England friendlies don't do it for me)
It was a great match. Scotland winning, then hanging on, then penalties.
5 - 4 on pens and a place in the euro's
Entertaining stuff.
Now hopefully, England can give them a right stuffing in the euro's

I turned off when they let in the equaliser in the last minute.

Salah's tested positive now. It's the first time Mané's passed anything to him this season.

It's good to compare notes so as to reassure each other that all are similar deep down. When you were younger men - there are no women round here so far as I can see - and you had playdoh and meccano and the two merged in a psychedelic haze to the sounds of the Chocolate Watch Band and the force fed munch on your mother's roast dinner did you all fool yourselves that you were on your way to getting an engineering degree? That's before buying your own science lab to make human beings just by moulding your very own Troy Deeney? I didn't personally but I am keen to improve the relations between others here,

Good evening lady and gentlemen. As you are aware I am Sir Spindle Oddblossom, Chairman of the Intergalactic Premier League Football Association and with specific responsibilities for diversity. Now I know what you are all thinking. He was brought up in Bradford so he is doing his best but doesn't know his arse from his elbow and furthermore he has spent about as much time educating himself as you have spent isolated in your own personal vacuums for forty years. I am delighted to say that nothing could be further from the truth, But I am fully aware that when little green pixies with surprisingly excellent footballing skills insisted on invading our teams, not to mention our traditions, it was unacceptable to everybody but only for a while. Then we sniffed their sweat and got the merits of it all, however much that is counter-intuitive.

Yep, so teams that had never won the league before did win and with their inputs but then I myself am married to a pineapple - I suppose I should say female in these strange times - so as my bank assets inflated who was I to question it? Then, of course, they all took us into glory in the cross continental tournament beyond the black holes. Anyway, yes, I know some have two heads, a belly button which drives itself around Jupiter and Venus, and a strange limp but that is in my view a lifestyle choice. As long as they are performing as my bank managers and I personally wish, as the self appointed spokesman for our family galaxy, I wish them well. Because we lay out food for them when they are hungry even if we haven't got a bleeding clue what they are saying. Plus I have personally agreed with my shrink and my succulent wife to stop her from divorcing me that I will no longer shag any green aliens from another planet in the showers.

As a season ticket holder i can watch Sutton United matches online. They won 5-1 against Kings Lynn yesterday and are up to 3rd in the league with games in hand.

I do though get irritated by the inane comments by the commentator - yes even worse than the big boys which i suppose is to be expected. And when it rains they keep having to wipe the camera lens.

Aye it's the same with iFollow with HTAFC
Especially if it's an away game and you get the away teams very biased commentators.
Their team never foul just robustly challenge. We get lucky goals they score magnificent efforts.

Now you're just being plain daft with that avatar.

That's me in my Friday night out gear....granny hunting.