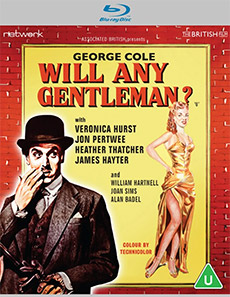 Harking back to the phenomenally successful Aldwych farces of the 1930s, Vernon Sylvaine's hilarious adaptation of his own hit West End play stars George Cole on top form as a bewildered bank clerk caught up in a series of unfortunate events! Directed by Oscar-nominated Michael Anderson and co-starring Veronica Hurst, Jon Pertwee, William Hartnell, Sid James and Joan Sims, Will Any Gentleman..? is featured here as a brand new high definition remaster from original film elements in its original theatrical aspect ratio.

Strait-laced Henry Sterling's peaceful life is periodically shattered by his wastrel brother's antics. But when he attends a local theatre to pay his brother's bouncing cheque he stays to watch the show - and ends up being hypnotised into thinking he's a devil-may-care philanderer!

More Will Any Gentleman..? products