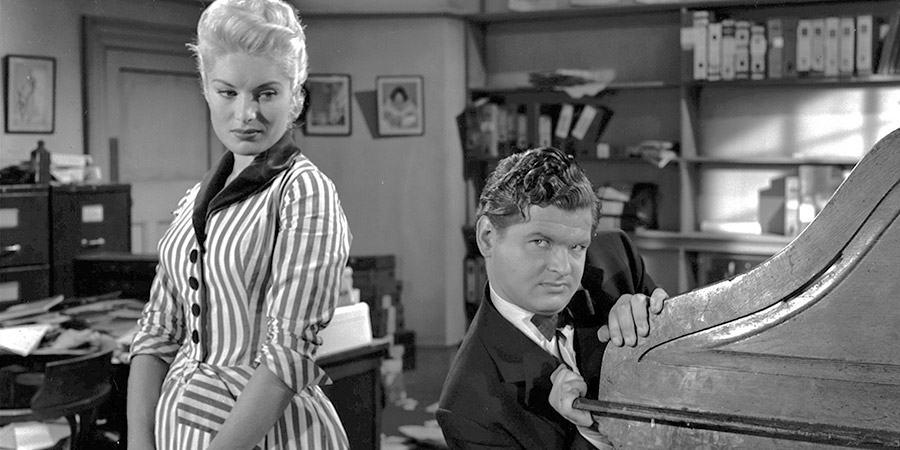 Hugo Dill lives in two worlds. One is the hard - and cold - world of reality in which he is a rink sweeper at an ice show. The other is the highly coloured world of the pulp detective magazines he devours and fantasises over to the point of mania.

However, change comes quick when a representative of the magazine arrives at the rink - inside the prestigious Wembley Arena - to award him a prize from a recent edition: £100 in cash, and a large, living, breathing bloodhound named Fabian! His presence startles Hugo such that he ends up out on the ice mid-show, causing extreme havoc and resulting in the swift sacking of both him and showgirl Frankie Mayne.

Thankfully the winnings are the perfect antidote, allowing Hugo to fulfil his life's dream by setting up as a private detective, and another chance encounter reveals Frankie as the ideal partner - perhaps in love, as well as sleuthing!

Hugo's first assignment ends in characteristic disarray when, disguised as a sandwichboard-man, he gets into a fight with a one-man band; but it leads him to the sinister Zacco, a suave native of the Iron Curtain country Uralia, who - with heavy Barakov - hires Hugo to pose as German-American inventor Professor Otto Stumpf, who is defecting to the East with his assistant, Gruber, and world-changing, weather-controlling invention.

The Uralians plan to have Dill go in Stumpf's place to a Royal Scientific Society demonstration of his machine, where they will rig it to explode, killing the disguised Dill instantly, so that they can sneak Stumpf and his microfilm secrets beyond the Iron Curtain undetected.

Luckily for the West, their meteorological meddling creates such havoc that the plot backfires: Gruber is blown up; Hugo escapes, startled but very much alive; and Barakov "cleans up" the mistake - but manages to kill the real Stumpf rather than the disguised Dill!

As Hugo attempts to alert the police to the crime, and Frankie tries to save her man, Inspector Hancock gives chase. All are soon running riot at the Earls Court Radio Show, as the Uralians attempt to use the latest long-range radio technology to transmit Stumpf's plans back to their country - but Hugo is not about to give up on the case of his life.

Production company
Picture
Black and white
Soundtrack
All original music in the film was composed by Philip Green and with lyrics by Norman Newell and Marcel Stellman, performed by the Sinfonia of London conducted by Dock Mathieson.
Laugh track
None