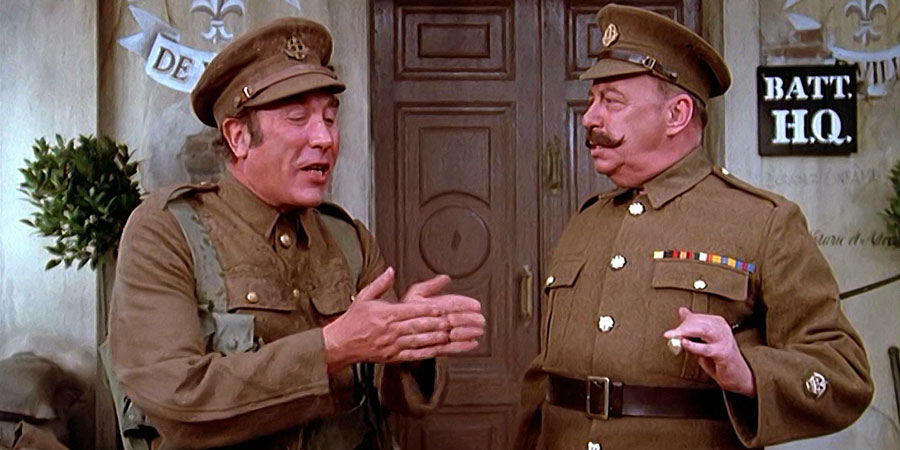 It is 1914 and Britain has just declared war on Germany. In London, Mr Lurk is under-footman in the household of Lord and Lady Twithampton, alongside butler Groping and maid, Fanny. Whilst his colleagues intend to enlist, Lurk has no such inclination - the war will be over by Christmas, he insists.

One evening, Lurk ducks into a novelty show, including an appearance by hypnotist The Great Vincento. Finding his Fanny and Groping already in the small audience, Lurk finds himself volunteered on stage and put under the performer's spell. After cries of "coward!", Vincento instructs him to be brave, and to sign up. Sure enough, Lurk does so, and is not best pleased to soon find himself near the Front in a small French village - with none other than the dastardly Groping as his commander!

Ordered to complete a series of menial tasks such as taking care of the regimental goat, Lurk busies himself between laziness, his residual cowardice, and an occasional ringing in his ears - a disembodied voice instructing him that he is the only man who can save England in this, its time of peril.

Whilst on watch one night, Lurk finds himself face to face with Nigel Phipps Fortescue, an aristocrat he knew from his days serving the Twithamptons, and now apparently a top agent in British military intelligence. He has secured a map detailing secret German war-plans and demands Lurk's assistance to reach HQ and hand over the details before it's too late. Persuaded by the Kraut bullets flying past his head, Lurk agrees and the pair set off to deliver the vital intelligence to top brass General Burke.

However, the Germans are aware of Nigel's identity, escape, and knowledge of their plans, and with territory swapping back and forth between sides on a near-daily basis, it's far easier said than done to get the crucial information to Burke in time. Can it be done? Can they elude the temptations of the beautiful but deadly Mata Hari? And how will they keep hold of the map and its details without risking it falling back into German hands? It's a rush toward 11th November 1918 to find out.