Written by: Angela Lord
This feature refers to an event, offer or opportunity that has now ended. 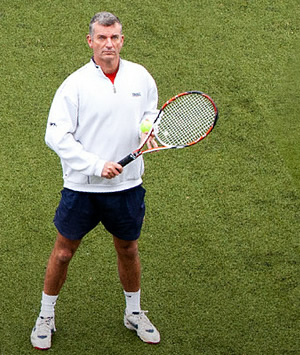 After taking up a bizarre bet to beat the entire Moldovan football team at tennis, comedian and author Tony Hawks (pictured) went on a journey of discovery to the former Soviet republic and wrote a book about his experiences, which has now been made into a film.

The result is a bittersweet comedy drama combining poignancy and humour as Tony encounters a range of colourful characters, strives to overcome language and cultural barriers and comes to a better understanding of Moldova and its people.

Here, Tony talks to Angela Lord about his film Playing the Moldovans at Tennis, and his goal to raise money for a child care centre in Chisinau, the state's capital city...

The story is based on your own true-life experiences: How much artistic licence did you allow in transforming fact into fiction, and did the transition from book to screen present any particular challenges?

Very little artistic licence was needed as the story was already very filmic - just a few changes to the running order. A transition from book to film will always present challenges. The two formats are just so different. A good film should make you want to read the book, and vice versa - but they remain completely different entities.

What do you find the most frustrating and most rewarding aspects of film-making?

The most frustrating aspects are: How long it takes, how many people you seem to have to need to get anything done, and the constant threat of something going wrong!

The most rewarding things are: Seeing it come together, working as a team, camaraderie.

As the writer, lead actor and co-director did you find it difficult to combine these roles?

Yes! It was difficult. I don't enjoy doing so much. But I'm cheap! When you're on a low budget, to get someone good to do these roles, you'd have to pay a lot of money or take a huge risk on someone. Plus it's my baby, and I know what I want from it. 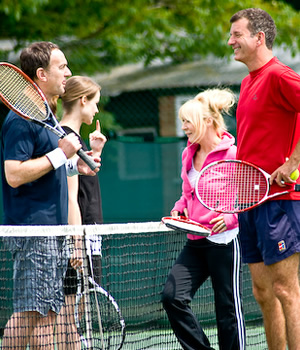 Did you ever consider casting someone else in the lead role, or did you figure it would be simpler to play yourself?

For this role I knew it had to be me - because I wanted the tennis to be authentic, and I hate it in films when they have to cheat stuff like that. If I ever made a film of A Piano in The Pyrenees, I'd love to cast someone else as me, and direct.

Do you find comedy harder to write than anything else, or does it come naturally?

I wouldn't say it comes 'naturally' but it certainly flows on some days. The real art of being a writer is to be able to keep going on the days when it isn't flowing.

You seem to tackle a broader emotional range in this movie compared to your previous film, Round Ireland with a Fridge. Did you have any coaching for the acting or do you think it is more to do with the subject material?

I think it's just the raw material. It requires more range. I didn't have any acting coaching - just did my best.

How much of the footage was filmed on location in Moldova? How did you go about choosing locations and obtaining permission to film?

Most of the film was shot in Moldova, except the obvious English stuff. Some of the interiors in Israel and Ireland were even shot in Moldova - because that was where we had our big crew. I had the Moldovan government behind us - the foreign minister is a fan of the book - and this helped us get locations. We also had a lot of help from our Moldovan line producer Valentina Lusuphodjaev.

What are your plans for the year ahead?

Promote the film, keep doing the radio stuff, keep writing - I have two projects underway - a kids' book and a comedy musical. I have started to write a screenplay for A Piano in The Pyrenees, but I'm not too far in yet. 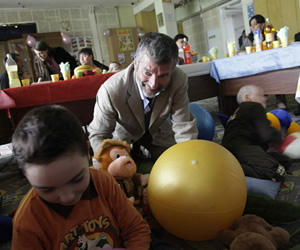 Profits from the film are going to the child care centre in Chisinau - how will this money be used?

It's for building a new centre. The work has started but it had to stop as there are no more funds.

You used your own savings to make the film - what prompted that decision?

From the word go, I wanted any profits from this film to go to the care centre. In order to keep the autonomy to do this, I needed to fund the film myself. This I have done, from money that my accountant recommended be set aside for my pension!

So funding the film gave you the freedom to choose the cast and tell the story in your own way?

Yes, it meant I was able to resist the pressure that film-makers are under to cast stars in their films. I know that my decision to use talented people who I want to work with, including brilliant unknown Moldovan actors, will make the film less commercial - and I don't care. I don't want executives lecturing me on my target audience and making changes in the story. I just want to tell it with integrity, love and care - and I believe we have done that.

To find out more about 'Playing the Moldovans at Tennis', and to watch the full film online, visit Official Website

The Good Life to become a stage show