About Playing The Moldovans At Tennis 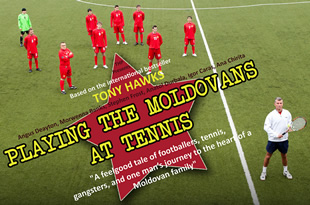 Playing the Moldovans at Tennis is an independent British feature film based on the best-selling book of the same name. It tells the true story of Tony Hawks, a complacent and somewhat self-indulgent writer, who attempts to win a silly bet in order to gather material for a lighthearted new book, but becomes embroiled in an uplifting and life-changing adventure.

Filmed ten years after the original events, Playing the Moldovans at Tennis is a dramatised version of the book starring the author, who also produced and co-directed alongside Academy Award winning Mikolaj Jaroszewiecz (Peter and the Wolf).

The eccentric wager was made in a London pub during a televised World Cup qualifying match between England v Moldova and resulted in Tony trying to track down the entire Moldovan football team, challenge them individually to a game of tennis, and beat them all. Along the way Tony discovers that he may have bitten off more than he can chew. In Europe's poorest country, which endures daily power shortages, gun-toting gangsters, and even an illegal and lawless breakaway republic, he finds that it's not that easy to coax footballers onto a tennis court.

Tony's friendship with the country grows as his intended 'trivial and fun' project begins to take on a far greater significance for everyone involved, and the result is an inspirational climax and unexpectedly enduring legacy.

The film's profits go to the Hippocrates Children's Centre in Moldova, which aims to improve the health of children with chronic conditions who are living in socially vulnerable families. The centre was started by Tony using the proceeds from the book after he was inspired by his stay with a Moldovan doctor and his family.

Tony says "I wanted the film of Playing the Moldovans at Tennis to be all about giving. From the word go, I wanted any profits to go to the care centre for kids with cerebral palsy in Chisinau Moldova, and to enable that I needed to fund the film myself. The story is about Moldova, so in a sense I'm taking from that country - it seems only fair that I should give back. An independent production also meant we were free to tell the story truthfully, with integrity, and with love and care - and I believe that we have done that".