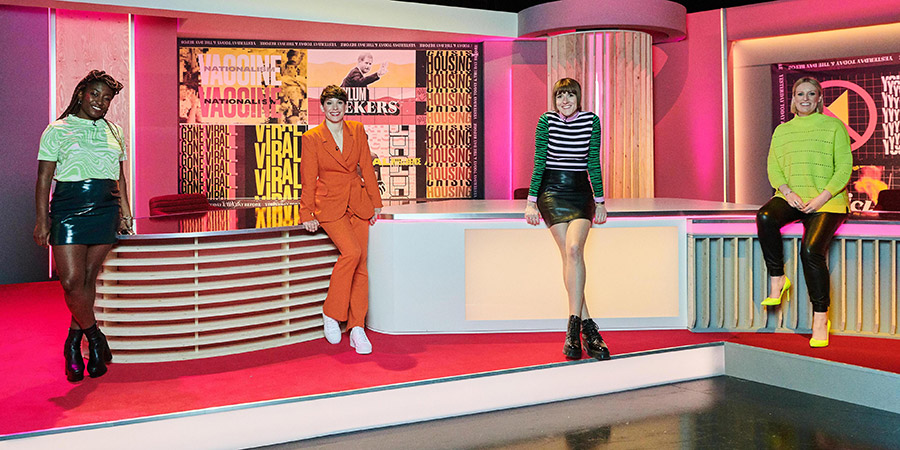 Kirsty Wark was originally billed as appearing in this episode, but was replaced by Steph McGovern.

Alastair Campbell may be known as Tony Blair's right hand man or for his recent stint on GMB, however the former spin doctor revealed that he has been nominated for a Bad Sex Award. Suzi Ruffell, Sophie Duker, Maisie Adam and Steph McGovern probably regretted asking him to read from the offending book - the panel cringed has he read an excerpt.

The One Where Steph McGovern Has Never Seen Friends

As the world went mad for the recently released trailer for the Friends reunion, Steph McGovern revealed to Suzi Ruffell, Sophie Duker and Maisie Adam that she had never seen a single episode of the hit sitcom. Maisie Adam couldn't believe it when the daytime personality admitted that she believed the Rachel haircut was styled after a girl in her class...

Steph McGovern may be known for her bubbly daytime TV personality however the host admitted that she hates hugging. Even as restrictions are lifted and we're allowed to resume 'intimate contact' the TV personality confessed that she won't be hugging anybody. She called out Strictly dancer Anton Du Beke as the worst hugging offender, explaining he pirouettes into his hugs.

Tony Blair never had a phone while he was PM

Sophie Duker's a big fan of a protest

Sophie Duker ain't gonna be silenced and prevented from protesting.