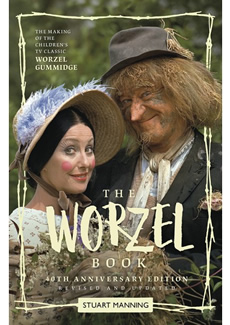 The definitive guide to Worzel Gummidge just got bigger, with over 30 pages of extra content, including new interviews and facts, an all-new chapter about the 1990s Worzel animation project featuring script summaries, storyboards and pre-production art, plus dozens of new photos in black and white and colour.

When a former Time Lord swapped time and space for the mysteries of the countryside, one of children's television's most unusual personalities was born. Jon Pertwee's portrayal of the anarchic scarecrow Worzel Gummidge won him a new generation of viewers and would become his most enduring character.

The Worzel Book traces the journey of Scatterbrook's scarecrow, from the days of early radio and the novels of Barbara Euphan Todd, through to the fondly-remembered ITV television series and its revival in New Zealand, and now the exciting new BBC adaptation starring Mackenzie Crook.

This is the untold story of a much-loved TV classic, featuring dozens of interviews with cast and crew, including Una Stubbs, Geoffrey Bayldon, Jeremy Austin, Bernard Cribbins, Barbara Windsor, Lorraine Chase and Sean Pertwee, illustrated throughout with over 400 photographs in black and white and colour, and includes a foreword by Sherlock creator Mark Gatiss.

The inside cover Polaroid gallery from the first edition of the book is not included in this revision.