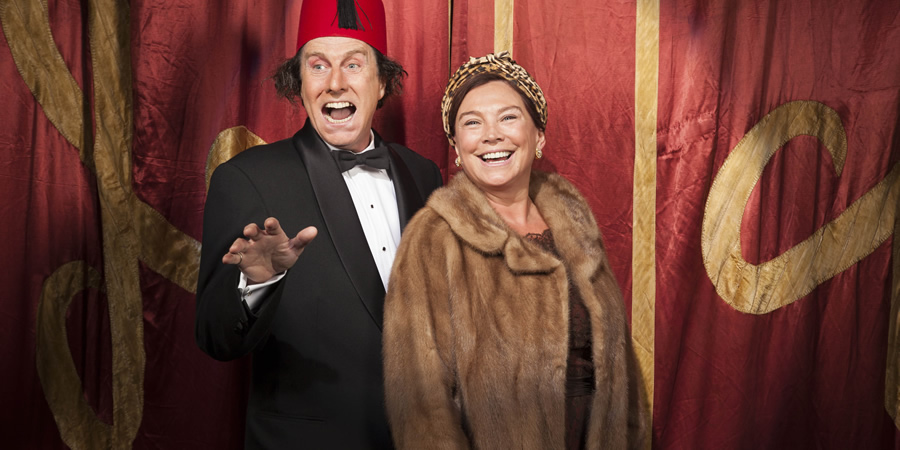 A drama based on the life of Tommy Cooper and the dilemma the married comedian faced when he fell in love with his assistant. David Threlfall stars

The script focuses on the dilemma the much-loved comedian faced when he fell in love with assistant Mary Kay and embarked upon a relationship that would last 17 years. Tommy was married to Gwen, whom he adored and affectionately nicknamed Dove. Tommy was unable to choose between Dove and Mary, and his untimely death live on air in 1984 meant that he never did.

When Tommy's extensive touring started to affect their home life, Dove decided she couldn't go on the road with him any longer. Whilst Tommy travelled the length and breadth of the country with his own brand of visual humour and ingenious magic tricks she knew she had to remain at home to run the house. Their children, Tom Junior and Vicky, needed her and maternal Dove knew her own mind - "She's actually not much like a dove. She's strong. Kills first, asks questions later".

The late nights and post-show drinks were taking their toll on his health, and Dove tried to convince him that TV work was enough. But touring was where Tommy's heart lay: "A miner goes down a mine, a stand-up comedian stands on a stage and looks the audience in the eye."

But Tommy found he couldn't tour alone and asked stage manager Mary Kay if she would join him. Mary was gentle, diligent and good at her job. She would arrange his props and tricks, flash a warm smile and reassure an often-tense Tommy before he took to the stage. He needed someone to bolster his confidence and it was Mary's loving support that made the difference to his performances. The pair fell in love, and just like that, Tommy became torn between two equally devoted women.

Filming began in London in June 2013 with former London Weekend Television Producer and award-winning magician, John Fisher, acting as a Consultant on the drama. John was a personal friend of Tommy Cooper's and is the author of Always Leave Them Laughing, a definitive biography of the comedy legend's life.