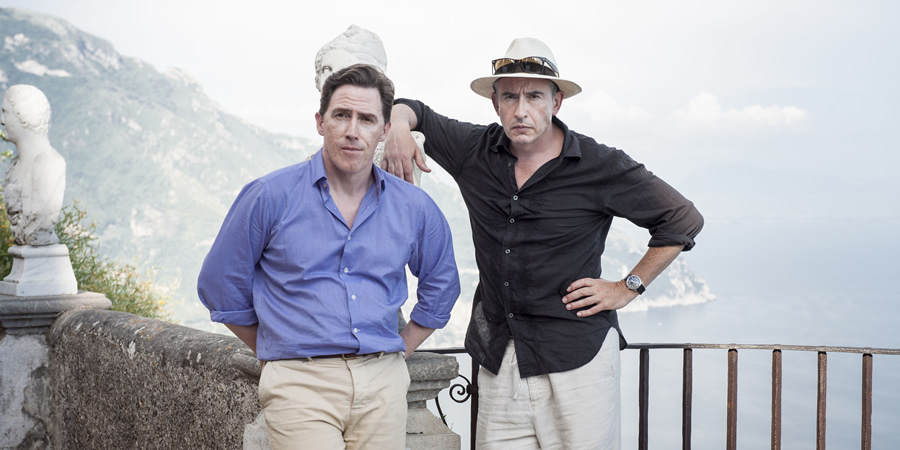 Improvised food-based travel tours with Steve Coogan and Rob Brydon. The stories are fictional but based around their real personas.

When Steve is commissioned by the food supplement of a Sunday newspaper to review half a dozen restaurants, he decides to mix work with pleasure and plans a trip around the north with his food-loving American girlfriend. But when she decides to leave him and return to the States, Steve is faced with a week of meals for one; not quite the trip he had in mind.

Having exhausted all other options, he reluctantly calls Rob, the only person left he can think of who might be available. Never one to turn down a free lunch (let alone six), Rob agrees and together they set off for a culinary adventure.

Over the course of six meals at six different restaurants in and around the Lake District, Lancashire and the Yorkshire Dales, the ultimate odd couple find themselves debating the big questions of life, such as how did I get to be here and where do I go next, over a series of culinary delights.

Series 3 - The Trip To Spain (Sky Atlantic): Just as Don Quixote undertook three journeys, Steve and Rob set off on a third jaunt of their own, this time travelling over 1,000 miles down the entire length of Spain. Following in the footsteps of poet and novelist Laurie Lee, Steve and Rob's semi-fictional alter egos hit the road in search of culture, history, breathtaking vistas and, of course, some of the finest food in Europe.

Series 4 - The Trip To Greece (Sky One): The duo lock horns over tragedy, comedy, myth and history. All while dining on cuisine traditional to beautiful Greek hot spots including; Assos, Kavala, Stagira, Athens, Epidaurus, Hydra and Plyos among many many others.