Scots On The Box

Together the comedians crack open Dr Finlay's Casebook, pour themselves a large Scotch & Wry and begin Chewin' the Fat to celebrate the last 60 years of television in Scotland.

From Take the High Road to Monarch of the Glen, Rikki Fulton to Rab C Nesbit, Fred and his Scots On The Box guests unlock the doors to the TV vaults for a special two-part quiz show on Hogmanay. 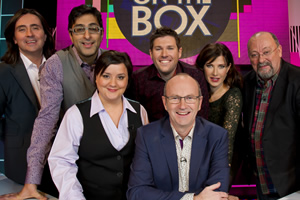