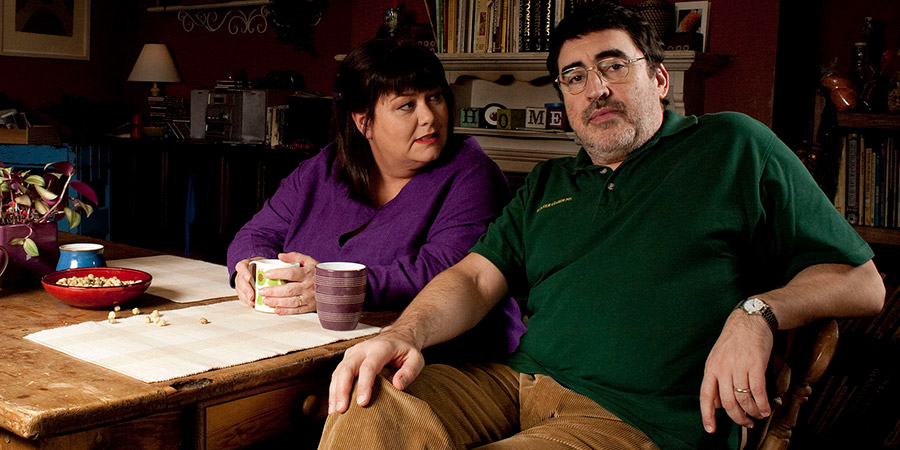 Roger & Val Have Just Got In

Dawn French and Alfred Molina star in this series focusing on the everyday, seemingly trivial trials and tribulations faced by a middle-aged married couple. The bittersweet comedy looks at how they get on in the first half an hour after walking through their front door.

Home for the Stevensons, on the surface at least, is a sanctuary of warmth, security... and what can best be described as organised chaos. Dedicated botanist Roger is a highly principled man with a strong set of values, and an even stronger hatred of injustice. His enduring love for his wife is matched only by his passion for the seeds and saplings he nurtures in his work at the Winter Gardens. Meanwhile, Val, a food technology teacher at the local comprehensive, sees bringing her work home as a perk of the job. Together they settle in for the evening without ever exerting too much physical energy, devoting their lives to the ups and downs of everyday existence - which for them includes more than a few whimsical, and often erratic, flights of fantasy.

So, with the help of copious amounts of tea, the couple concentrate on the issues of the day - whether that's re-hanging the curtains or facing cleaning out the "big drawer".

But, despite all their solidarity, is their happy marriage and united front against the rest of the outside world quite as solid as it seems?

Alfred Molina says: "A truly great script, a brilliantly talented leading lady, and a gifted production team - it's an irresistible combination, and I am thrilled to be a part of it."

Dawn French adds: "It's a measure of how unique, rich and funny the scripts are, that Fred Molina said 'Yes' in a heartbeat."

Production company
Soundtrack
The closing music is Come Softly To Me by The Fleetwoods.
Laugh track
None