Danny starts his first week at university looking forward to fun, parties and girls. He gets an unwelcome surprise when his old school pal Shane - the 'worst best friend ever' - turns up and proceeds to gatecrash his entire university existence.
Preview clips 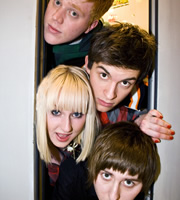 In the first episode, Danny embarks on his first week at uni - the fun, the parties and the girls, including Becky. However, Danny is about to get an earth-shattering blast from the past in the form of Shane, his outrageous slacker mate from school and the "worst best friend ever". Blagging his way in through last-minute clearing, Shane proceeds to gatecrash Danny's entire existence and ransack his best-laid plans.

Nude - Off the Hook

Danny embarks on his first week at university.

Punch - Off the Hook

There's something in the punch.