Shane has never been on a real date before, so he is amazed when he lands a double date with a pair of stunning sisters - exchange students from Germany.
Preview clip 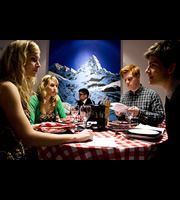 All Shane needs to do is convince Danny to come along as his wingman. But will they be able to afford the restaurant without resorting to doing medical experiments?

Danny and Shane phone up Fred in some distress whilst they are on a double-date, after having taken part in a medical drug test.