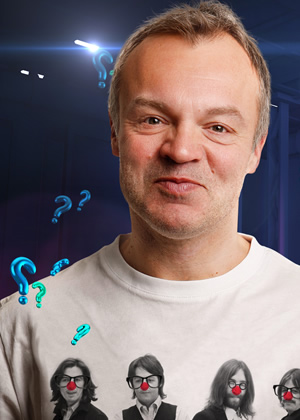 The host will be attempting to set the Guinness World Record for 'Most Questions Asked on a TV Chat Show' when on Thursday 7th March his takes over BBC Three for the entire night.

Comic Relief's Big Chat With Graham Norton is set to run all all night without trailer breaks, so the host will be assisted by co-presenters. The full list of co-hosts has yet to be revealed but the BBC says it will be using "chat-show veterans such as Sir Terry Wogan and Frank Skinner."

Radio 1 DJ Nick Grimshaw, who was recently signed up to host new panel show Sweat The Small Stuff for the channel is also said to be acting as a co-host for one of the segments. The BBC says: "The co-hosts will ensure Graham remains on track to hopefully smash the world record and raise as much money as possible for Comic Relief."

The chat show segments will be interspersed with music. Example, Paloma Faith, Hurts and Laura Mvula are amongst those signed up to perform. 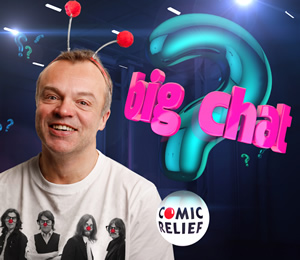 In addition to the above, Radio 1 DJ Greg James will host Big Chat Backstage Party, talking to the guests in the green room before their interviews with Graham.

Comic Relief's Big Chat with Graham Norton will be broadcast live from BBC Television Centre in London. The pre-registration form to apply for tickets to be in the studio audience is now open. There will be two audiences, one from the start of the show until approximately 9.30pm, with a second sitting running from then until the post-midnight end of the show. To register your interest visit SRO Audiences

This year marks the 25th anniversary of Red Nose Day, which, since its inception, has raised over £600m and helped to change lives both in the UK and Africa. Red Nose Day is on Friday 15th March, but there are lots of TV specials in the run up to the evening. Other programming includes Let's Dance For Comic Relief (Tim Vine video), a comedy special of Pointless (details) and Russell Brand hosts a music and comedy gig called Give it Up for Comic Relief (trailer).

As previously revealed, the main telethon on Friday 15th will be hosted by comedians including Michael McIntyre, Rob Brydon, John Bishop, Lenny Henry, Jack Whitehall and Jonathan Ross and feature sketches including one from Rowan Atkinson.

Comic Relief's Big Chat with Graham Norton will be on BBC Three on Thursday 7th March from 7pm until approximately 1am.

Below is a trailer jointly promoting BBC Three's broadcasts of the Give it Up for Comic Relief gig and Graham Norton's special: