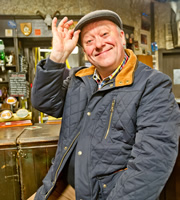 Jimmy appears to save the day after he hits a walker with a golf ball and is hailed a hero by Ken, the teenager's father. Bernie, Bill and Conor are chuffed to bits for their chum, but the green eyed monster in Jules is having none of it.

Meanwhile, Conor and Bernie attempt to curb Jules's brusque manner in order to attract more customers - though keeping a lid on her rudeness proves frustrating.

Delayed by approximately 8 minutes from its scheduled 10:35pm slot due to over-running news coverage.

Getting brusque with Bill