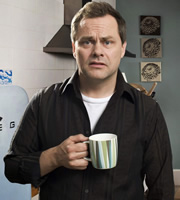 Rick is a disillusioned stand-up comedian and writer, whose career has not gone the way he planned. Hosting corporate events, appearing on second-rate daytime chat shows and fronting cheap DVDs was not what he dreamed of as a young man.

Worse still, he's stuck with a lousy stage name that he chose 20 years ago. His real name, Rick Shaw, isn't much better though!

Rick combines a mass of neuroses and petty grievances with a terrible propensity for lying.

Rick's very tight with his money - the only person who manages to extract any cash from him is his teenage daughter Sam. Rick tries to save money wherever he can - whether it be forging his tax disc, stealing cutlery from Michael's cafe or badly self-engraving a christening present, he'll go to any effort to save a couple of quid. The trouble is Rick is in the public eye and so rarely gets away with his penny-pinching!

You suspect that, if it wasn't for co-writer Marty, Rick wouldn't have any standup material at all. Rick can often be heard repeating funny lines that he has heard earlier in the day to Mel and Marty, but pretending that they are his own original jokes. 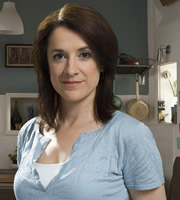 Mel is Rick's unflappable long-term partner and also an agent to c-list stars. Only someone as calm and philosophical as Mel could survive life with Rick. Her dry sense of humour and independence helps her to shrug off all the very worst of his excesses.

Mel knows that Rick is his own worst enemy (well, if you exclude everyone Rick has ever come into contact with from that list). She often ends up having to step in and stop Rick's misjudged actions: for example she made him put an end to his pointless and time-consuming grudge against Wayne the noisy paperboy. 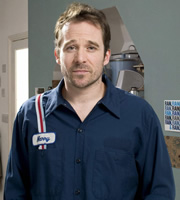 Marty is Rick's quick-talking American writing partner. He spends most of his days arguing with Rick about every subject under the sun, drinking too much coffee, and devising work avoidance strategies.

It's not easy working with Rick, but winding him up and feeding his neuroses helps Marty to relieve frustrations. Marty invariably comes up with all the funniest lines for the scripts - and seemingly without any effort - something which secretly annoys Rick immensely.

Marty is incredibly laid back. With such a quick wit, he could probably be a much bigger comedy star than Rick will ever be - but he appears to be quite happy to sit in the background behind-the-scenes feeding Rick lines, and letting him take the credit for them too. 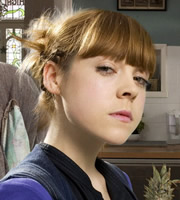 Sam is Rick and Mel's laid-back, feckless daughter. Although she is fond of her parents, she rarely communicates with them, unless it's to ask them for money to subsidise her college life!

Sam is 17 and would probably be the world's least motivated human being, if it were not for the existence of her boyfriend Ben. 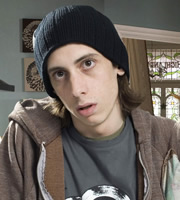 Ben is Sam's boyfriend and, if it is possible, he's even more laid-back than she is!

In fact, Ben is possibly the least-motivated human being on the planet. He ambles through life cheerfully doing nothing (apart from a lot of drugs one suspects). 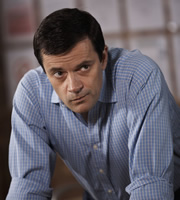 Michael is the owner of the local wholefood cafe. He is a very intense man... some might actually go as far as to say that he was unhinged! Michael setup his cafe after leaving a high-powered job in the City... and six months intensive therapy at a rehabilitation centre in Dorset!

At first, Michael thought that Rick was his friend, however he soon discovered this was not the case when Rick refused to endorse the cakes he was planning on distributing. Things soon got worse, much worse, for Michael though - Rick managed to crash into him in his car!

Despite Rick's constant lies, bad deeds and damage, Michael still politely puts up with him... probably because he needs his custom (Rick is one of the only customers the cafe gets). 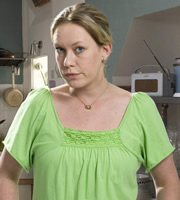 Magda is Rick and Mel's Eastern European daily help, who combines a surly and depressive nature with a talent for winding Rick up without even trying.

Magda is learning English from daytime television but her own tales of woe put to shame anything you might hear on Trisha.

Rick tries to take advantage of Magda's naivety about the laws and customs of Britain - for example, in one episode he tries to get her to accept three points on her driving licence for him.