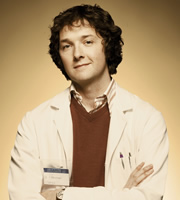 The closest thing the lab has in stock to a straightforward human being, Alex basically runs the lab.

He thinks that he would be able to do a much better job of this if it weren't for, well, everyone else. Whatever goes on in the lab, it's his responsibility. Or rather, it's his fault.

He somehow always believes that everything will be all right if he can just get whatever crisis they're facing out of the way. He is always wrong. 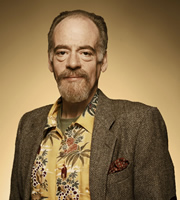 Professor Mycroft is technically the head of Arnolfini Research Laboratory, not that he really fulfils the role.

Mycroft is deeply experienced (he won a Nobel Prize for something twenty years ago) however he never puts this to use. In fact, he hasn't done anything approaching a day's work since. The college only keeps him on because his name looks good on the official stationery!

Ever so slightly lecherous, borderline dypsomaniac dipsomaniac and willfully eccentric, John is generally off doing his own thing. 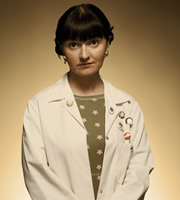 Cara is the lab's assistant. Smart as she may be, Cara is not connected to the real world in any useful way!

Cara's has been a lab assistant for about twelve years and is not about to move on any time soon. Most other places would have got rid of her, but Alex is very fond of her, treating her as his little sister. 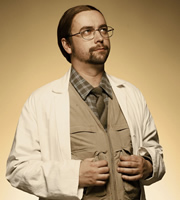 Brian is a laboratory assistant at St Dunstan's University. He has right-wing tendencies and a love of tazers.

Brian doesn't really like anyone else in the lab and considers them unprofessional amateurs. He is hopelessly, and not entirely secretly, in love with the Dean. She however has no idea whatsoever, not only about his feelings for her, but who he is full stop! 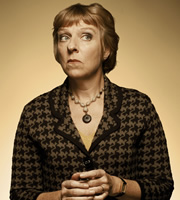 Dutch speaking Dean Miedema is in charge of the Arnolfini Research Laboratory.

She is often frustrated by (and sometimes the cause of) the chaos emanating from the Arnolfini. As far as Alex is concerned, she is strange, slightly unnerving, hard to read and usually unsympathetic to anything other than her own agenda. 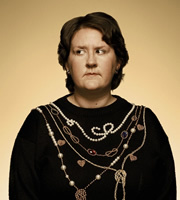 Minty is the secretary for the lab team. She has no idea what they do in there and no real interest in finding out, being as she is deeply unimpressed with the world as a whole.

Minty has an attitude which should make her a prime candidate for being fired, but somehow she just - but only just - stays the right side of the line.

The oddly named Minty has a collection of astonishing jumpers, which she considers the height of smartness but everyone else thinks are... well just see for yourself.