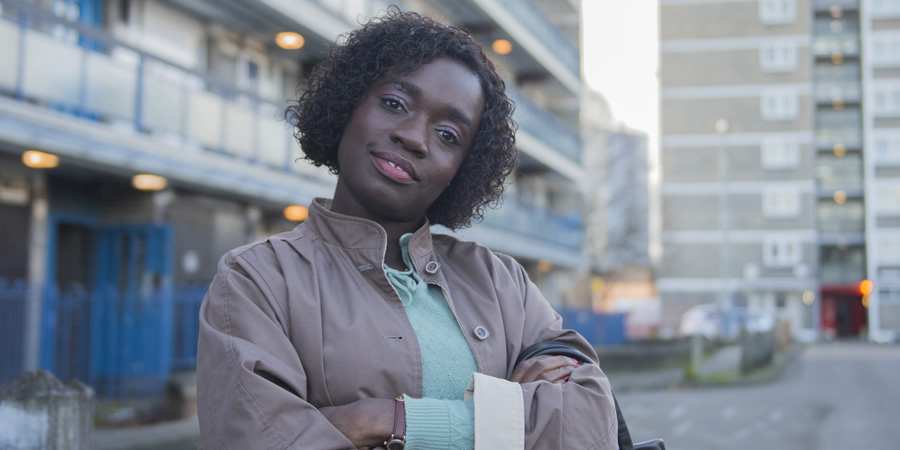 Madeline Appiah, who plays Agnes, talks about her role in the show...

Who are you playing in the show?

I play Agnes Easmon, and she is the wife of Walter and the mother of Kobna. She's a Ghanaian-Sierra Leonean woman, it's 1985 and she is living in Leyton. When we meet her she's happy. They've come over years beforehand, and they've had that transition from what that would have been like in the 70s to finding their own community, their set-up, their rhythm. They're comfortable and they're happy by now. Obviously there are aspirations and things that they probably still want to do, but where they're at I think they're content.

As this show depicts it, what was life like for a black woman living in Leyton in 1985?

There were issues and it was tough, but the African women that I grew up with, my mum and aunties, they just got on with it. You were proud, regardless of what society you came from. My mum came from Ghana, not from poverty but from a big, well-established family. Obviously she wanted different opportunities that she could have abroad. You came with all that pride of who you are - Ghanaian, your food, your culture, your music and your language. And there wasn't anything like feeling 'less worthy'. It was just a shame that sometimes their reception wasn't quite what they'd hoped for.

That's not been the case for Agnes and Walter, has it?

Not when we meet them. They will still have their odd encounters with people, because racism is still there, and it's still here to some extent now. But I feel like when they first came, it was probably more intense, and I guess there'll be parts of London where, if they walked into, they would still have quite a lot of racism.

Agnes talks about a time when she was chased by some young boys with stones, just because she's a black woman, and obviously you know that the riots were happening, so there were still a lot of racial tensions. But within their home, and within their own community, I don't feel like it's something that they're battling every second of the day.

Instead they have this relationship with Bagpipes and Kirsty...

... whose race is not relevant at all. Agnes and Kirsty's relationship is really good. In some ways they are very different, but they have the common ground of they love their family, they want the best for their family, they're women, they have a good giggle, they support each other, they understand each other. Agnes knows that Kirsty knows that she can be quite serious in some things; and Agnes knows she's quite fun. We have that balance, that really nice chemistry. 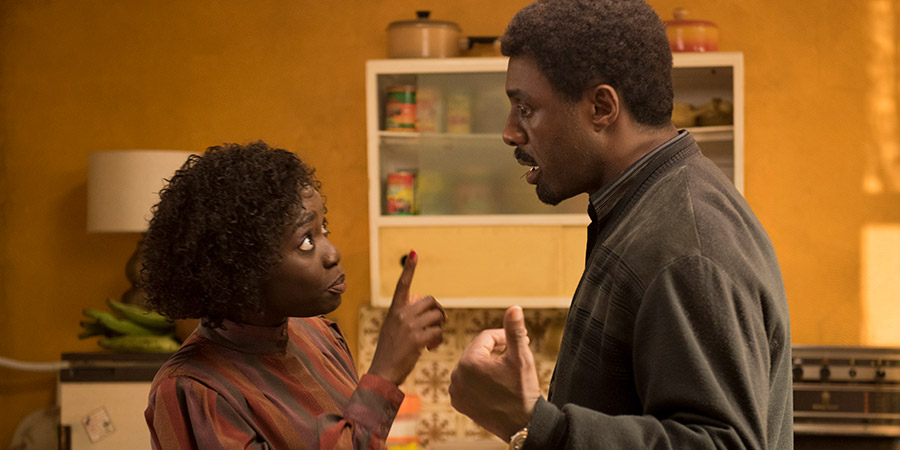 It's really happy. They are so content, they know each other, what makes each other tick, but there's still a little spark within them, and there's a lot of playfulness. But I feel like they are a traditional family, in that she sees her husband as the head of the house, and things like making sure food is prepared - that's her job. She's a home keeper. But she does have aspirations to maybe branch out, open a hair salon, or just do something for herself. But for her right now, her family, her son and her husband are her priority.

It's been great! Because I grew up in the 80s, and watched a lot of films growing up from the 90s that were set in the 80s, it's nice to be in that era, and to be in those costumes. People just said a lot more of what they felt, and everything was much less PC than it is now and I like that. I remember my parents and the older people, doing things like Jheri curls and wearing shoulder pads. And suddenly now I'm not this little kid looking on: in this job I've actually been able to live the part, wear the shoulder pads!

It's given me a newfound respect for my parents, because it was hard for them to come and make a life, and yet they did it with style. Even though you might not have had lots of money, these Africans that I grew up watching, their shoes would be shined, their clothes were ironed, they were smelling sweet. They'd work many jobs to just have a good life with their family, they'd work hard, they weren't scrounging for anything. You'd work in the morning, you'd have your main job, and work in the evening, but then you always had a real nice family community and respect, and just everyone was close, in and out of each other's homes. We took that for granted.

I did the short film King For A Term, so I met him there, but that was all very quick. I felt safe, if that makes sense, on that because you're thrown in and you suddenly have to create this story of this couple. This time around it's been nice actually getting to know him a bit more. He brings such a warmth to the show, and a 'fun-ness', which was nice, because the characters that he plays can be quite serious, but he's so funny.

Families will always exist, so it will always touch you from that perspective, and I think it's nice to have something like this as well, because you don't see families like this on TV - an African family that's not necessarily depicting anything negative or in poverty. It's just a family enjoying their life in the community. It's nice, funny, heartfelt, and honest. I just hope people can connect, no matter what their background is.