Damien is hesitant to start a weekly column for Waitsbury's supermarket, but when his partner Anthony decides to take up a new spin on the 'cabbage soup' diet involving copious quantities of courgettes, Damien takes the job to rail against fad diets. Damien also has to bake a birthday cake for his builder Mr. Mullaney. 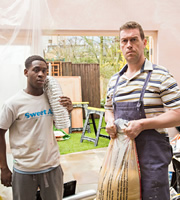 Cookery writer Damien Trench (Miles Jupp) has all the ingredients for a perfect life. He lives in a delightful house in a nice part of London with his committed partner Anthony (Justin Edwards), and between writing cookery books, 'keeping house', and monitoring the work being carried out by his builder, Mr Mullaney (Brendan Dempsey), he barely has time to fit in anything else. He certainly hasn't time to give any thought to writing a column for a supermarket, Waitsbury's, that his agent Iain Frobisher (Philip Fox) is keen for him to do, especially as it's the builder's birthday coming up, and of course, he has to bake him a cake.

But when Anthony takes up a new diet - a twist on the 'cabbage soup' diet, involving copious quantities of courgettes - Damien is piqued into taking the Waitsbury's job to rail against fad diets, and in doing so his world starts to collapse, like a slowly cooling souffle.

This episode is an adaptation of Series 1 Episode 2, April 21st To 25th, from the original radio series.

This episode was filmed as a pilot.