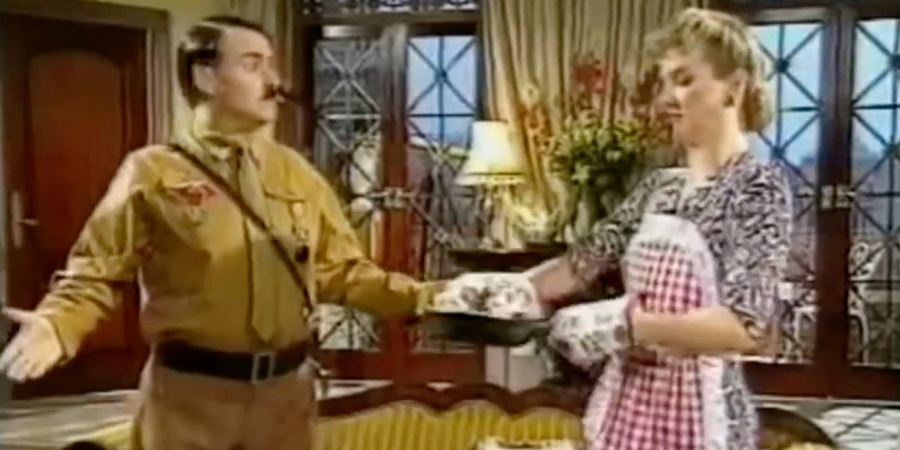 Suburban dwellers, Adolf Hitler and Eva Braun, are less than pleased to discover that their new neighbours, the Goldensteins, are Jewish

It's 1938. Austria has just fallen. Poland is next. Neville Chamberlain has convinced us all there will be peace in our time. And in a quiet corner of downtown Berlin, a new couple have moved into a duplex apartment in a smart condominium block overlooking the Reichstag. But there's a problem. He's small and salutes all the time and a Nazi. And she is ditzy.

Meet Adolf and Eva, the nuttiest neighbours anyone ever.

He marches, he rants, he practices his speeches from the balcony, and hangs out with the craziest bunch of freakballs in town. And all she wants to do is get married. Tough luck for the hard-pressed Goldensteins who live across the floor in the next apartment. When you have a catering business to run, the last thing you need is Adolf Hitler popping by every five minutes stealing the milk from your fridge.

But enough yakking, let's step inside and say hello to the gang. You'll meet Adolf's nephew Ziggy, a conman who sells fake tickets to the Nuremberg rallies and Eva's mom Grunwald. Even Adolf runs scared of her! Oh and that red head, chewing gum, with the attitude, that's his firey kid sister Gretyl. So begins the craziest story ever!

Every day the Hitlers and the Goldensteins slug it out over coffee and cup cake's and while Arny and Adolph scrap, through the swing doors in the kitchen the girls try to figure out how to knock the boys heads together.

Watch out for the unlikeliest hit of the new season as Adolf kicks off those pesky jackboots and shouts out: "Heil Honey I'm Home!"