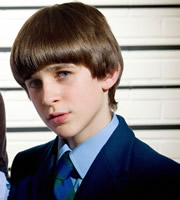 Fletcher Moon, known as Half Moon to his friends, is a fully qualified private investigator from the Bernstein online Detective Academy.

He is not the tallest or most confident 13-year-old in the playground but he sees things that his school friends don't.

Since graduating he has solved all sorts of minor mysteries at school and at home. Now, if a crime has been committed in the playground he wants to know about it, and he will stop at nothing in his unrelenting quest for justice.

Moon excelled at the online course (a course for adults, but Moon confesses to Mia that he wasn't entirely honest about his age).

By passing the course, Half Moon earned his badge and in his mind, the right to be taken seriously as an investigator. Moon is a smart kid. 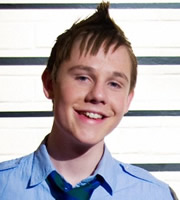 Red is Half Moon's unlikely partner. Son of a reformed, locally-notorious criminal family, Red is a year older than Half Moon but has been kept back in school due to absenteeism and poor grades.

In the best tradition of crime-busting duos the pairing is not without a bit of disagreement. Moon sticks to the rules, Red knows how to break them but their friendship is built on trust and a mutual respect. Red abhors crime and has felt at first hand the tarnish of being wrongly accused. While Moon is the brains of the investigation, Red tends to charge into situations without thinking about the consequences. 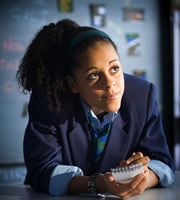 Mia is the sassy, straight-talking journalist for the school newspaper, always in pursuit of her latest scoop. If Half Moon wants the truth; Mia just wants the story.

Mia is a social butterfly, dropping into social groups to get the latest information. She tends to only help Half Moon's investigation when it furthers her story or when Half Moon can convince her she'll get a scoop out of it in the end.

Mia's knowledge of playground politics and her ability to read a social situation in a second is invaluable. She brings the emotional intelligence that Half Moon and Red's investigations sorely lack.

Half Moon thinks Mia would make a fantastic detective but it's the story Mia is after and this can lead her into her own moral dilemmas. Mia has a secret soft spot for Red, but being Mia, this is expressed by being meaner to Red than everyone else. 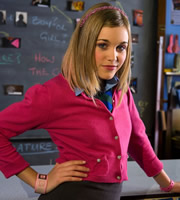 April Devereux is the teacher's pet - and an aspiring criminal mastermind. Whilst all the teachers and parents love her, the school kids know her as leader of 'The Pinks'.

April considers herself merely to be an entrepreneur, who sees an opportunity and takes it. April would never entertain the idea that she is the sort of low life thief that Half Moon would investigate.

She believes she is above that level of criminal activity and more importantly above Half Moon's kiddie detecting games - she has an empire to run.

Self-serving, manipulative, and clever enough to cover her tracks, April's charms ensure that her nose stays clean. She sends in her minions to work on her behalf and uses her astute judgement to plan her own crimes knowing how to profit by staying safely on the sidelines of the clumsy criminal attempts of others.