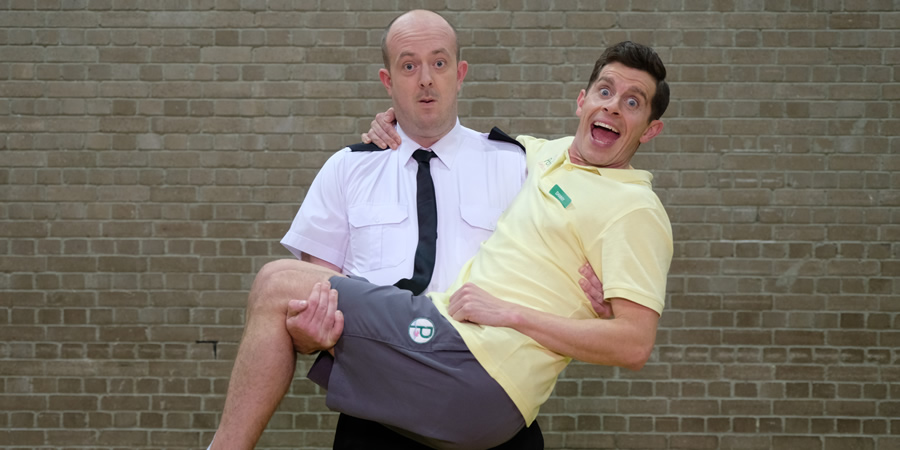 Hi. What is the premise of Danny & Mick?

Well, the show is set in Pottsfield Leisure Centre, where Danny and Mick work. Danny is the receptionist / pool attendant / cleaner / trainer / dogsbody and Mick is the security guard. Thing is, they're both idiots. They basically mess up the simplest of tasks, much to the chagrin of our boss, Joy (Nina Wadia). There's so much in the show from slapstick set pieces, to silly jokes, to elaborate magic acts, the lot. 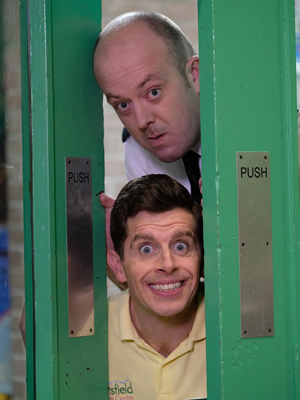 The characters are brothers. You're related in real life too? Do you always get on?

Yeah, we're half-brothers! In our case, that means we have the same Dad but different Mums. Our Dad is the infamous Clive Webb, which some of you may know from Tiswas, Razzmataz and How Dare You!, amongst countless other things.

It was amazing growing up and seeing Dad on telly as kids, we also got to go to the studio a few times and watch him film various bits, which was amazing. We have another brother too, and as we all got older we'd slowly be introduced into 'the act'.

So, to cut a long story short, we get on perfectly. Obviously there have been some small arguments (as children, Danny smashed up Mick's favourite tractor. It will never be forgiven) but we think that's normal.

Dad also makes an appearance in a few of the episodes (playing our dad!), and it was fantastic to have him there as he's supported both of our careers so much. Our little brother also has a cameo in one episode which was a great laugh.

You've been working together for quite a while now, on various stages. It must be nice to get this chance to show what you can do on TV?

We really love working together and have done so since we were kids. We've also been trying to get on the TV for years as well, and it's amazing that our weird humour is going to be out there for more people to (hopefully) enjoy! Our mums are also really proud. As is Dad obviously. 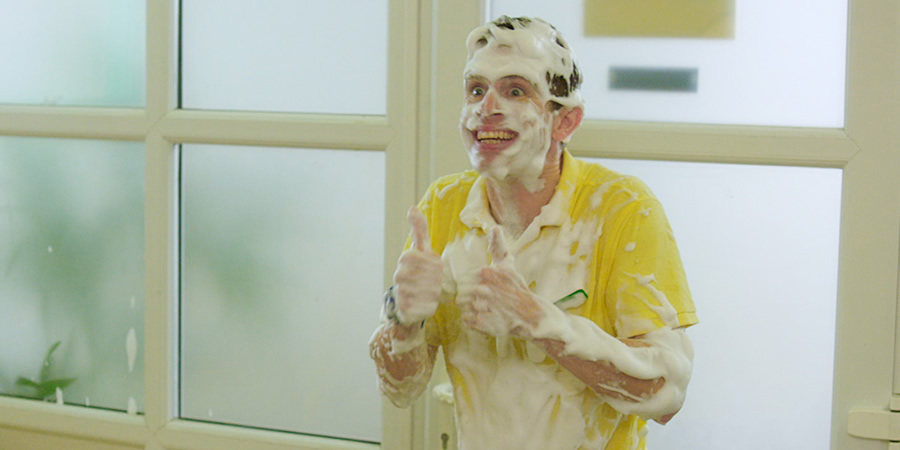 There's some very messy scenes in the show! Is the reality of that fun, or tiresome?

There's a few REALLY messy episodes, and we all had such a laugh filming them. Filming the 'slosh' routine for the first episode Paper Boys was actually the first shot of the day at 7.30am! Generally, in theatre we don't start anything until after lunch!
You do occasionally find yourself getting a bit frustrated when you're sticking your head in a bucket for the 20th time in a row, but you quickly remember you're lucky enough to be doing your own telly show and a big part of that show is getting messy.

The director, Rebecca Rycroft, was also great at spotting when we were getting a bit tired and giving us a little break.

We did have showers on set thankfully (as the location was based in a working leisure centre) and we both spent a fair bit of time in them. It was actually a really funny experience as you're in a little shower cubicle next to each other, and you can just laugh at how ridiculous it is. Just two men in their 30s, covered in fake snot, having a little shower.

There's some impressive slapstick-orientated set pieces in the programme. What was the most tricky to get right?

Luckily, most of it is almost second nature for us now after doing slapstick in theatre for years. We also rehearsed all of the big set pieces several times, so we both knew exactly what to do and when. We also had to consider where the cameras were, which in theatre is all on the 'wide'. We also needed to make sure we didn't injure ourselves and not spring any surprises on the producer, David Simpson.

The trickiest part without doubt was trying to throw a bucket of gunk from off camera, and it'd have to land on someone's head. It took us hours because it was all slimy and would leave the bucket a different way every time. Luckily we got it in the end, and it looks fantastic. 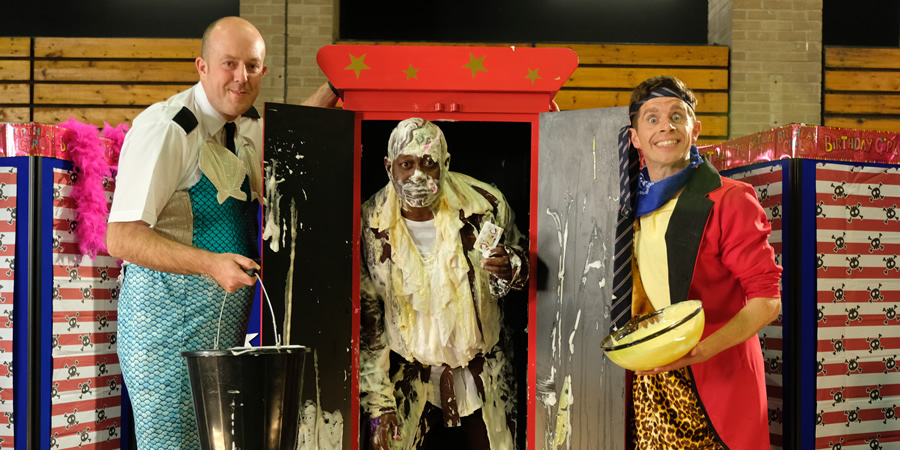 Danny and Mick get into all kinds of trouble across the 20 episodes. Tell us more about some of what's coming up?

Oh, where to begin? We think every episode has something daft in it, and that's a great start for any comedy series. Our favourites will always be the more physical comedy episodes, because we have such a giggle doing it. At the beginning of the series there's an episode, Spa Day, where Danny and Mick have been asked to create a massage room. There's a hilarious routine with lots of olive oil with slipping and sliding.

There's one called Germnastics, in which we got to play with snot AND make up our own gymnastics routine. Also, one of the episodes has Dave Benson Phillips in it. Imagine getting to work with the gungemaster himself?

How long did it take to film in total? We spotted a picture of a clapperboard stating 'Slate 1056'!

So, we were filming for 6 weeks, but the year before that we'd done a pilot. As soon as we found out we were getting a series, Tom Beattie (the executive producer) had us down to London a few times for script meetings and readthroughs etc. Then we had a couple of weeks rehearsals immediately before filming and a week of rehearsals before the 2nd block of filming.

Filming is much harder than either of us gave it credit before we started. The days are long and you have to be up and out of the house before 6! We both thought the milkman was a made-up thing before this job. A man in an electric car, delivering delicious dairy in the early mornings? Sounds daft doesn't it? But we have met him and can confirm he exists.

Neither of us ever thought of it in a negative light though, we are so happy to have been able to do it and would do it again in a heartbeat. Second series please BBC... 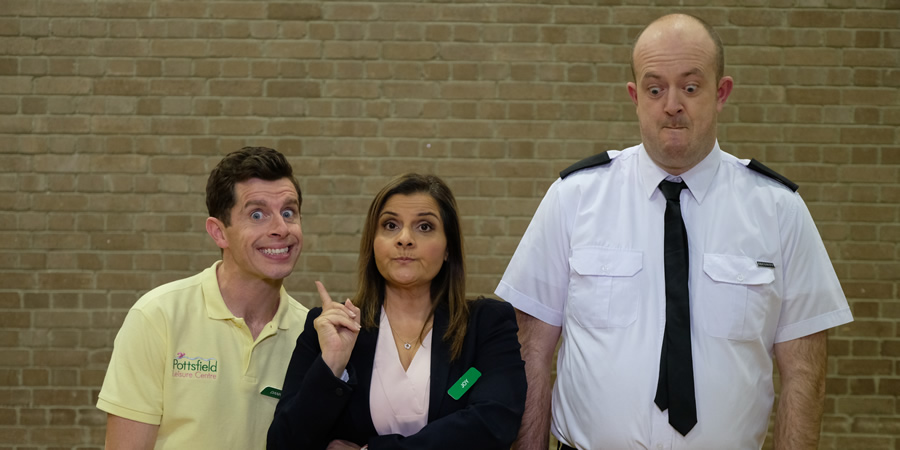 As you say, Nina Wadia plays your boss in the show. What was it like to work with her?

No, that's just a very funny joke. For two people who hadn't ever really worked in telly before, we learnt so much from her. She's a top comedy actor, and we think that comes across in her performance. She was a joy (Joy, get it? The character name? No?...) to be around and to have on set.

She's also a massive practical joker, and would hide our scripts, glue them together, nail them to the roof etc. We couldn't have wished for a better person to bring Danny's and Mick's boss to life.

Are you looking forward to more kids recognising you in the street? The downside is they'll think you're idiots?

I think it can only be a good thing? Even if they do think we're idiots. On the other hand, we both pride ourselves on the speed in which we complete our respective weekly big shops, so if we get stopped for a selfie it might knock a few minutes off our times. If that is the case, then we have both agreed to invest heavily in a series of elaborate disguises.