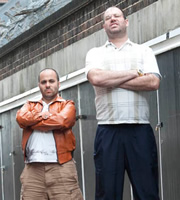 Sunshine means well and tries to be as 'legitimate' as possible for his wife Kelly (Eleanor Lawrence) and their two daughters, but news that old pal, Mad Mickey Quinn (Sean Pertwee) has escaped from a prison van, is quite the surprise.